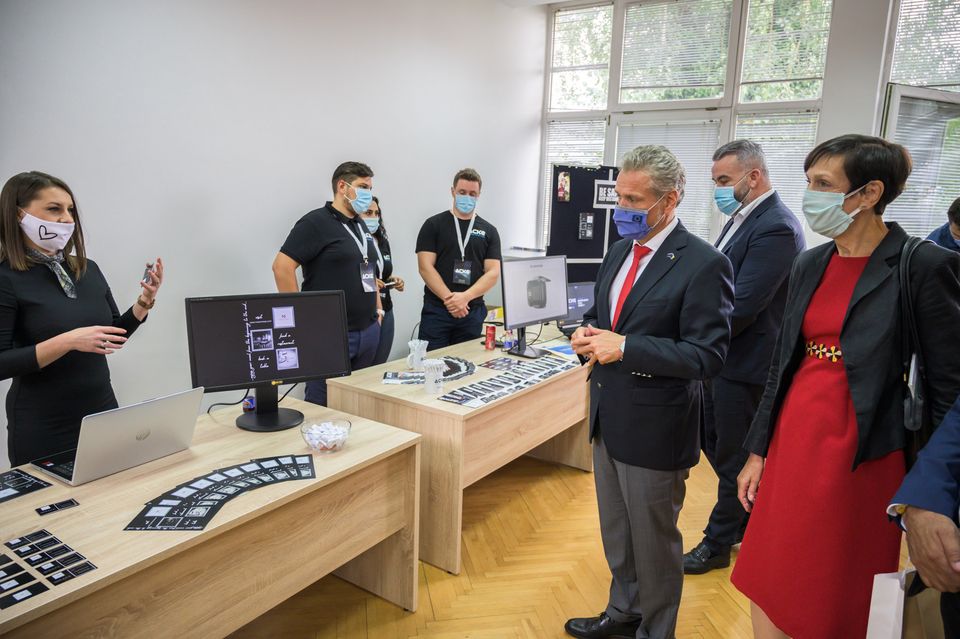 The Head of the EU Delegation to BiH and EU Special Representative Ambassador Johann Sattler has officially opened the Centre for Excellence in Entrepreneurship in Sarajevo at a ribbon-cutting ceremony today. The Centre will be providing long-term support to young entrepreneurs in their endeavours to start their businesses and create new jobs.

The Centre was established under the EU4Business project, which is jointly funded by the European Union (€15 million) and the Federal Republic of Germany (€1.1 million).

This occasion was also used to present the initial eight young entrepreneurs who had launched their business ventures in the area of ICT technologies and creative industries with the Centre’s support. This is the first of a total of five groups of young entrepreneurs who will benefit from the EU4Business project in the form of technical support and grants to turn their business ideas into a registered companies.

Ambassador Sattler said: “In these difficult times caused by a pandemic affecting jobs and businesses, the EU has responded rapidly by allocating over €300 million to help BiH and its citizens. The largest portion of the envelope is intended as a direct support to the economy and private sector, and these young people who have received support today to implement their business ideas are among the beneficiaries“.

One of them is Abid Mešetović with his business ACKE.  “Frankly speaking, the money comes in handy, of course, it will help develop and grow my business, but the knowledge I have gained over the past several months is priceless.  My business has taken off since. I am grateful to you all”, said Mešetović.

The value of this business supporting project for Sarajevo Canton is €250,000, of which €200,000 is the European Union contribution for direct support for 25 business ideas of young entrepreneurs. Priority will be given to ideas that will help overcome the economic impact of the COVID-19 pandemic.

“With the support of the European Union and German Government, we have gathered a plethora of strategic partners and founded the Centre for Excellence in Entrepreneurship together. Generations of young people are already passing through it. In addition to financial support, they are receiving technical support as well. We are now officially opening the Centre for Excellence in Entrepreneurship, and expanding our partnership, which is a technical base for support, while promoting the first generation of the entrepreneurs supported. We bind this Centre and our entrepreneurs to prove themselves at the regional level, too. I have no doubt that, with the support of other international and BiH partners, we’ll start seeing results in the nearest future”, said Nedžad Ajnadžić, the Mayor of Centre Municipality.

A two-month training course organised by the Centre, located at Avde Jabučice 52, Sarajevo, is currently being attended by a second group of participants, and a public call for the next group will be published soon. Through this support program, young people will be supported in developing their business venture and a business plan. The best business plans will receive a financial support of BAM 10.000 each and mentorship by the organisations and institutions included in the local partnership.

Aiming to strengthen the economy of BiH, the EU4Business supports the development of entrepreneurship, export oriented sectors, tourism, agriculture and rural development. The implementing partners of the project are the GIZ, ILO and UNDP. The project time frame is April 2018 – March 2022.