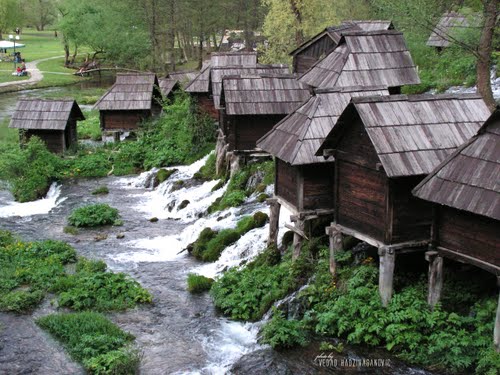 Near the town of Jajce, between large and small Pliva Lake, on the gypsum barrier water mills were built known in Jajce also as ‘’mlinčići’’. Nineteen water mills – dwellings, covered with shingles, were built of oak wood more than a hundred years before.

They were built without attics, windows, chimneys… For centuries, people from the surrounding villages were bringing full bags of corn and wheat on their horses, and grinded them in the mills. They would return to home with flour. Placed side by side, with clear Pliva between them, they still defy time.

However, they no longer serve their original purpose, they do not grind corn and wheat anymore. Today, they are here to testify one time and natural beauty of the area.

Every family owned a mill which was used only by immediate and extended family members. Water mills stopped being used due to a process of industrialization but will stay forever as a monument of one age admired by many tourists. The idea is to put several mills, out of 20 existing, into function again.

These water mills are several hundred years old. They were mentioned in Ottoman and Austro-Hungarian period.

There are numerous sights in this city that are worth visiting, due to their historical, natural and archaeological beauty. One of these attractions are the little mills called mlinčići. They are located between the Great and Small Pliva Lakes, and they are built of oak wood. They are over 400 years old and are an example of traditional local carpentry skills.

Data from 1562 say that there were 24 mills at that time, of which only six were not in function. In the 17th century, the number of little mills increased to 26. They were then owned by landowners, and were given for use to the local population, who paid landowners a tax on flour.

Although they have not been in function for a long time, the little mills in Jajce attract a large number of tourists, but they are mostly targeted by foreign and domestic photographers. In 2009, the little mills/ mlinčići was declared a national monument of Bosnia and Herzegovina. In May 2011, unknown perpetrators set fire to four grinders, which burned to the ground. Two years later, the burning mills were rebuilt as part of the 14th Regional Restoration Camp.

Analysis: How much Money the Diaspora sent to BiH this Year?
Next Article 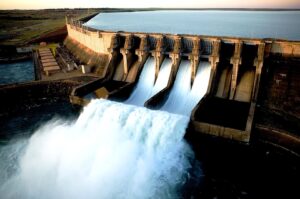