In the year 1747, the riots started in Bosnia, especially in Sarajevo. This anarchy lasted for some fen years. Mula Mustafa Bašeskija recorded that pashas who started oppressing the poor were responsible for the riots. Behavior of the pashas prompted all citizens to stand against them. At that time, Bašeskija writes, there was no respect for pashas, judges, not even for the Ulama, but the men of reputation started interfering with administration operations, allegedly to protect the people from violence. In fact, they only collected a large amount of money from the people, under the guise of tax.

However, this all led to mutual rivalries and bloodshed. Around 150 people lost their lives Sarajevo only. According to tradition, families Morić and Halilbašić started a quarrel. Their supporters fought as two enemy armies, Bašeskija wrote.

However, the people of Sarajevo had enough of the riots, especially the traders. Several of them made an agreement with Mehmedaga, the city commander, fraudulently led the commander of the tenth department Sari Muta to Aga’s Inn, locked him and killed him.

When the supporters of Sari Murat heard of that, they attacked the Inn and killed sic traders. Citizens, who were horrified with the murder of these traders, gathered the next day and captured the leaders of the attack. They took 23 of them to the White fortress, where they strangled them all. According to the tradition of that time, every execution of death penalty was marked with a cannon shot, thus notifying the people of Sarajevo. Among the unfortunates were two Morić brothers: Hajji Mehmedaga (Pašo) and Ibrahimaga. This put an end to the ten-year-long anarchy in Sarajevo and the death of Morić brothers was mentioned in a folk song.

“Bosniaks felt somehow safe at the time. That is why they were quite taken by surprise when the Austro-Hungarians and the Eugene of Savoy attacked. This might be the reason why the Prine Eugene of Savoy wrote the following:

“The Turks are distraught with our arrival,” said Mr. Muamer Hodžić from the Oriental Institute in Sarajevo.

In 1727, the Bosnian regent Gazi Ahmed Pasha Skopljak got an idea to build a wall around Vratnik. The wall was completed in 1739, during the rule of Hekimoglu Ali-Pasha. In the end, there were five bastions, three towers and five gates in the walls. One of the bastions was built on the Jekovac cliff, after which the Jekovac bastion was named, but due to the somehow yellow color of the stone it was called the Yellow fortress. Ahmed pasha hired masters from Dubrovnik to build the Yellow fortress.

The silence of weapons from the Yellow fortress in 1878 marked the beginning of the Austro-Hungarian occupation of Sarajevo and Bosnia. However, Muslims were allowed to shot from the cannon during Ramadan, to mark the end of fasting. This practice was banned during the time of Yugoslavia, but it was reintroduced in 1992 and lasts up to this day. The Ramadan cannon on the Yellow fortress has become a real attraction lately, both for the people of Sarajevo and for numerous tourists who come to the Yellow fortress to enjoy the breathtaking views of the capital of BiH and to break the fast with the sound of the cannon. 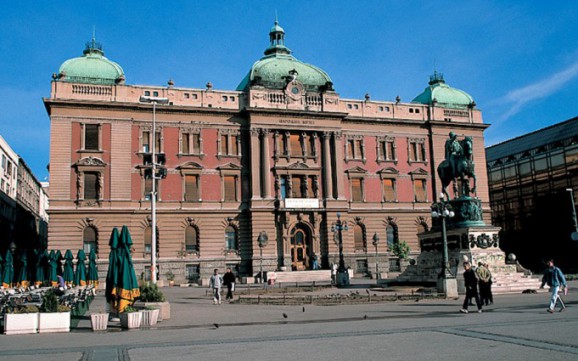