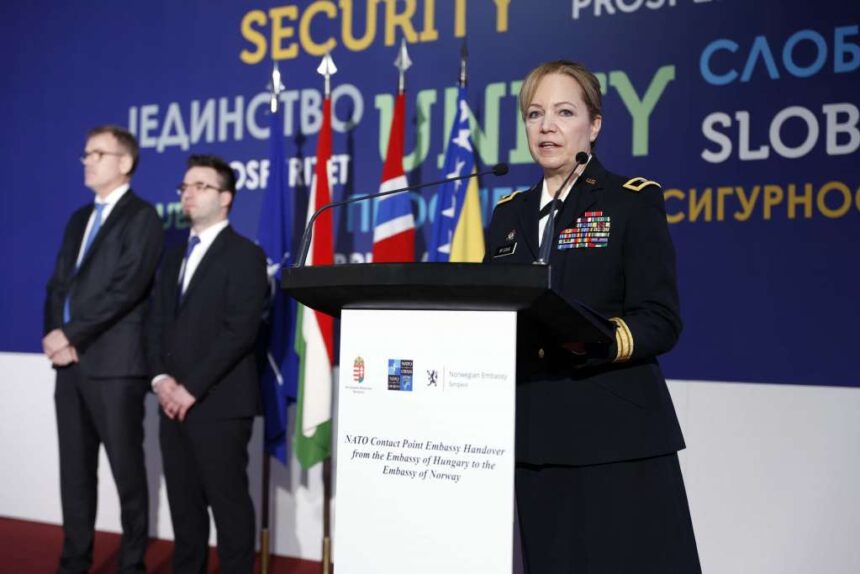 At a ceremony in Sarajevo, the Embassy of the Kingdom of Norway in BiH took over from the Embassy of Hungary in BiH the duty of contact embassy for cooperation with NATO.

Commander of the NATO headquarters in Sarajevo, Brigadier General Pamela McGaha, said that Norway is taking on the role of contact embassy at an important moment.

“There is a new security reality in Europe, and the number of challenges we face is growing. No country can solve them alone. This is what makes NATO more important than ever before. I am looking forward to cooperation with Norway, which has been supporting Bosnia and Herzegovina and NATO for a number of years, and the continuation of important security projects aimed at preserving the safety of citizens,” she said before the ceremony.

According to her, in the last four years that Hungary was the contact embassy, some significant achievements took place.

“The formation of the Commission for Cooperation with NATO, the Reform Program, the Light Infantry Battalion Group, as well as the support of allies during the COVID 19 pandemic,” she stressed.

Chargé d’affaires of the Hungarian Embassy in BiH Csaba Felegyhazi emphasizes that their priority is the preservation of peace and stability in the Western Balkans, a key interest in geopolitical and economic terms.

As he said, Hungary as a contact embassy had two important tasks – informing the public about NATO and providing assistance in cooperation between NATO and BiH.

“We always talked about our experiences, we never told Bosnia and Herzegovina what was good for them. That decision is in the hands of BiH. political actors. On the other hand, we tried and I hope succeeded in taking into account the sensitivity or different attitudes related to NATO. Thus, our goal is to be and remain active, without intensifying certain tensions, related to that issue,” said Felegyhazi.

He also believes that the public could receive more concrete and objective information about the Alliance.

They wanted to show, he says, that NATO is not only a military, but also an economic and political organization that can help a lot in the civilian aspect, such as civilian rescue cooperation.

“During the four-year mandate, we had excellent cooperation, not only with international partners and allies, but also with Bosnia and Herzegovina. institutions, which was of great help in our activities,” he emphasized.

As Norwegian Ambassador Olav Reinertsen emphasized, it is important to increase visibility and inform both the public and politicians about what NATO is and to promote the values that are valid in NATO.

“Together with our allies and partner countries in Bosnia and Herzegovina, we will fight against malignant foreign influences, disinformation, cyber threats and many other issues. We are looking forward to the upcoming cooperation with both Bosnia and Herzegovina. entities. I have already started talking about NATO in Banja Luka,” Reinertsen told reporters, Fena writes.

Dodik: ZSO in Kosovo will be like Republika Srpska
Next Article