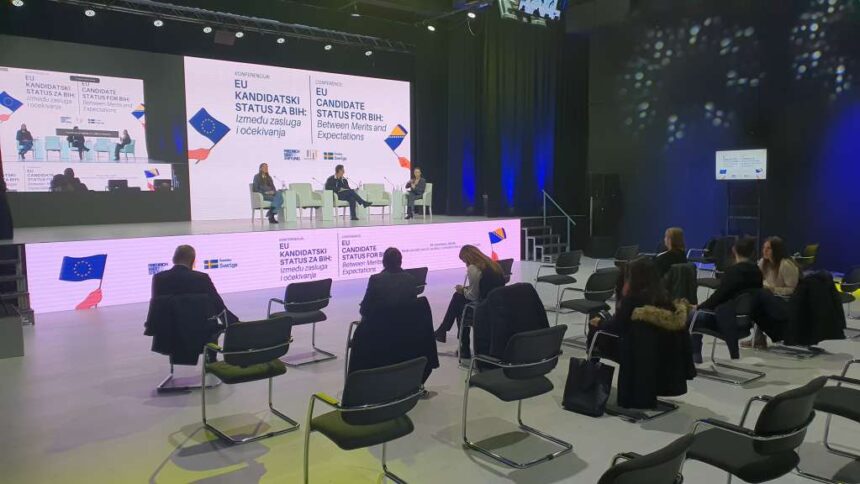 The Initiative for Monitoring the European Integration of BiH and the Friedrich Ebert Stiftung in BiH organized a conference today in Sarajevo on the occasion of receiving the recommendation of the European Commission for granting BiH candidate status under the title “EU candidate status for BiH: Between merits and expectations”.

The representative of the Initiative for Monitoring the European Integration of BiH, Edo Kalinić, points out that the conference was organized because civil society in the processes of the European integration of BiH is mostly left out of all important dialogues, which is why the representatives of the Initiative sent invitations to the authorities and institutions dealing with European integration, as well as to the EU Delegation in Bosnia and Herzegovina, to come and discuss important topics.

“The main topic was certainly the potential candidate status for BiH after the recommendation of the European Commission. We will see what will happen at the EU summit in December. We need to show our will by adopting reform laws that we are committed to the European perspective of this country. The key is the quality of the reform processes, and we place ourselves there as a corrective factor of the government. We must focus on human rights, which are often threatened, and inform citizens about integration processes through the media,” said Kalinić.

Aurelie Valtat, head of the section for European integration, political and economic issues in the EU Delegation to BiH, emphasizes that BiH has only a few weeks until a very important meeting in mid-December when it will have to show progress in areas important for its candidate status.

“This includes the law on courts, the action plan for migration, operationalization for Europol and the issue of the High Judicial and Prosecutorial Council. Candidate status is a strong signal and it is very important that it be used for the benefit of the citizens of Bosnia and Herzegovina. Of course, there is also a geo-political aspect regarding the war in Ukraine, but that will certainly not be the only determinant when making a decision,” said Valtat.

Representative in the House of Representatives of the Parliamentary Assembly of BiH Saša Magazinović believes that the candidate status for BiH is a political decision and not a merit of the authorities in BiH, but that it is a good signal in the context of the formation of a new government, Fena news agency reports.