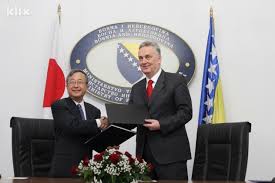 The Ambassador of Japan in Bosnia and Herzegovina, Hideo Yamazaki, and the deputy chairman of the Council of Ministers and the Minister of Foreign Affairs, Zlatko Lagumdzija, today signed a contract and exchanged opinions about the implementation of the grant of Japanese Government for the purchase of Japanese vehicles from the new generation, worth 500 million JPY (around 7.2 million BAM).

Mentioned funds will be spent for the purchase of the hybrid vehicles and vehicles that use environmentally clean fuel. Vehicles will be donated exclusively to local communities around the country, especially to those that suffered the most in last year’s floods, and that for purposes of the social care that operates at the local level.

In the next few months, the Government of Japan will send an expert to BiH who will, in the cooperation with relevant institutions in BiH, have a task to determine the exact number and needs of end users.

Although the exact number of vehicles that will be provided under this grant is not known at this time, because it depends on the results of tender that will be announced in Japan, all local communities in BiH (143 municipalities in total) can be potential users of this grant.

Dinka Delic, Miss of Yugoslavia in 1984, died in Sarajevo
Next Article The Assembly of ZDC appointed the Cantonal Government
Leave a comment Leave a comment