The horsemen of the Horse club “Hidalgo” this morning departed to religious event “509. Days of Ajvatovica” and on that occasion, the mayor of Stari Grad municipality Ibrahim Hadzibajric handed over the flag of Stari Grad Municipality.

Eleven horsemen departed towards Ajvatovica, who in the traditional costumes, went to the Old Town and the streets of Sarajevo to the BiH National Museum.

In front of the National Museum, it is planned that horses will be put into appropriate vehicles, from where they will be transported to Fojnica. From Fojnica, across Vranica and all the way to Bugojno and Prusac, the horsemen will reach the destination, News Agency Patria reports.

Ajvaz-Dedo, by which the spring and the surroundings were named Ajatovica, came into today’s Prusac from the East after the Turkish conquest of Bosnia. He was a learned and highly ambitious man who worked tirelessly on improving his new homeland and the education of the people. 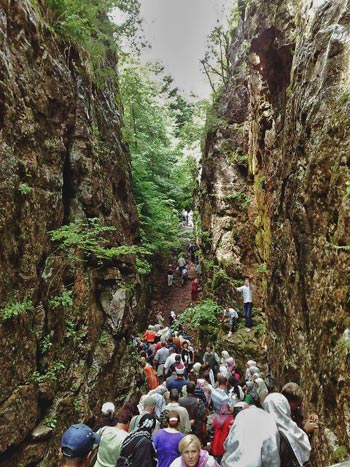 A river Prensa flows through Prusac (the former name of the settlement), which even at that time was not good for drinking, nor were the numerous wells sufficient for the needs of the place. According to legend Ajvaz-dedo, not far from Prusac, found a powerful spring of water but the spring had been shut off by a rock 74 meters long and 30 meters wide.
The rock obstructed the construction of a running water system so this bold and godly good doer spent 40 days praying to Allah to split the rock. On the fortieth morning, following his prayers, Ajvaz-dedo dreamt that two white rams collided and split the rock. When he awoke, he saw the rock split in half. Along the newly formed canyon wooden pipes were placed to take water into Prusac.

Seeing it as a sign of God’s miracle and blessing, people began going on pilgrimages to the place where the rock had split.

It is not certain when the first “pilgrimage to Ajvatovica” was held. It is interesting that the “pilgrimage to Ajvatovica” finds its periodic time frame in the tradition of the country of Bosnia, since it is not tied to any Hijri calendar for any of the two only constitutively certain Muslim holidays. Specifically, the commemoration of the Day of Ajvatovica falls on every seventh Monday by St. George’s Day, Visit my Country reports.