Prime Minister of Pakistan Nawaz Sharif officially visited BiH and held a series of meetings with BiH officials. However, one media house from Pakistan published that Sharif was insulted in BiH.

The reason for that is, allegedly, the fact that Sharif was welcomed by one of the ministers instead of the Chairman of the Council of Ministers of BiH Denis Zvizdić. That news raised a lot of noise in BiH public yesterday.

Ambassador of BiH to Pakistan Nedim Makarević said that this claim by the Pakistani TV house is ungrounded.

“Only the best things are heard about the visit by Nawaz Sharif. There are a hundred media houses in Pakistan owned by private businessmen and only one of them criticized the BiH Minister. That man is a private businessman, he is paid, and he decided to criticize a single segment,” said Makarević, adding: “The Pakistani Government took this visit very seriously. Every single detail passed through my office and everything was harmonized until the smallest detail, and Sharif knew who will welcome him.”

Makarević also said that the Minister of Telecommunications of Pakistan welcomed the Bosniak member of the Presidency of Bosnia and Herzegovina Bakir Izetbegović when he visited Pakistan, and that is not unusual.

“Head of protocol of the Prime Minister contacted me. The ministry will officially issue a statement tomorrow. In Pakistan it is normal that there is someone who criticizes,” said Makarević.

Makarević also said that export from BiH to Pakistan increased and there is an agreement with the Government of Pakistan on cooperation in the field of defense industry.

Moreover, a liberalization of visa regime for diplomatic passports and fight against terrorism is signed and bilateral consultations began.

Makarević claims that the doors between the two countries are slowly starting to open and that this is the right direction.

“Energoinvest was once in Pakistan. I would like them to go back there because Pakistan has troubles in energy sector. Since there is a strategic project between China and Pakistan, those are jobs that Energoinvest and other domestic companies can count on,” said Makarević.

Makarević announced the visit of BiH delegation to Pakistan soon.

“Prime Minister Sharif invited Mladen Ivanić, Denis Zvizdić and Igor Crnadak in an official visit. I hope this will happen soon. I will urge this and I hope the visit will be organized in three to six months. The doors are open, now it is up to us,” Makarević concluded. 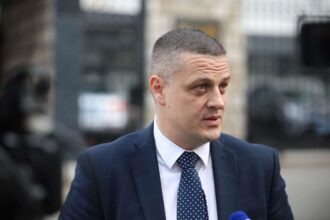