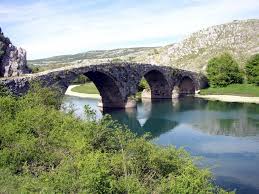 A stone-made bridge connecting two banks of the Zalomka river in the south of the country is among the oldest in Bosnia and Herzegovina. Although there is no written proof of that, some say it dates back to the 16th century and that it was built by the Ottomans.

The bridge was probably erected in the sixteenth century or later, most likely before the Mehmed Paša Sokolović Bridge in Višegrad.

It is suspected that architect was no other than famous Mimar Hayrudeen, apprentice of even more famous Mimar Sinan, at the same time as the construction of the Stari Most in Mostar, and the name given by the carnivores who transported their herds over it.

It is built entirely of stone, it is about three meters wide and its slender appearance, with three arches, irresistibly reminds of the diminished version of the Ćuprija na Drini in Višegrad.

Despite its age, and very little restoration, the bridge is well preserved and still used today. The bridge, along with the Kalufi stećak necropolis, was nominated for nomination and they are potential candidates for UNESCO’s listing of the World Cultural Heritage.