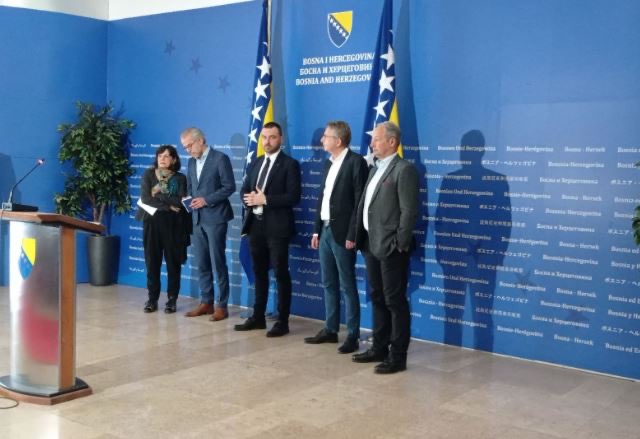 Three Members of the European Parliament (MEP) Andreas Schieder from Austria, Dietmar Koster from Germany, and Thijs Reuten from the Netherlands visited Bosnia and Herzegovina (BiH) yesterday to discuss BiH’s European path and membership in the European Union (EU) with representatives of BiH political parties.

”The issue of nationality and ethnicity is less important in the country I come from, and our common future is more important to us. We support the membership and candidate status of BiH. The EU is not just an institution, it is a community of values that must be implemented. So we wanted to talk to all the parties to hear what the situation looks like here. We are sorry that this did not happen, we have not talked to everyone, but we still think it is important to continue this process. We oppose the voices and politicians who play their national game, who are leading the country into trouble. This playing with fire, we refuse it. You know who I’m talking about, it’s not in the interest of the people of BiH. The people want a European perspective,” Schieder stated.

German MEP Dietmar Koster reminded that the European Parliament is currently considering a new report on BiH, and stressed that he supports the Central Election Commission’s (CEC) decision to call the General Elections in BiH.

”I emphasize that there must be free and fair elections. I also support the candidate status of BiH, but it is clear that it can get it if the sovereignty and territorial integrity of the state is preserved. It is important that Russia does not instrumentalize Mr. Dodik, that cannot be accepted. The third topic concerns our report. I think the position of the common people must be improved. Social rights must be strengthened,” Koster emphasized.

Dutch MEP Thijs Reuten sent a message of support to “all constructive politicians and citizens of BiH.”

”On this day, Europe Day, which is in the spirit of overcoming difficult historical circumstances, as well as the need for cooperation, I call on all politicians in BiH who talk a lot about the European path, to support words with deeds. To implement reforms that will ensure Europe’s future. As members of the European Parliament, we are here for all BiH citizens. We are not against any citizen, we are here to promote European values and we are against nationalist rhetoric that will push the country into further divisions,” Reuten said yesterday.

Sasa Magazinovic, chairman of the SDP Caucus in the House of Representatives of the Parliamentary Assembly of BiH (PABiH), also addressed the media, thanking the three MEPs for promoting European values in BiH and strong support for our country’s European path.

”Although BiH is not a member of the EU, we have our representatives in the European Parliament. It’s these people. They are politicians who promote European values in BiH, but not modified, but the same values that are valid in Vienna, Berlin, and Amsterdam… This distinguishes them from some people who have tried to impose on us values that do not dwell in their states,” Magazinovic pointed out.

He reminded that MEPs Shieder, Koster, and Reuten were the initiators of sanctions against the member of the Presidency of BiH, Milorad Dodik and that this was “only a small part of what they are doing for BiH.”

Yesterday’s meeting in the building of BiH institutions in Sarajevo was attended by representatives of the SDA, SBB, DF, Our Party, and SDP. HDZ BiH was not informed about this meeting, BHRT writes.