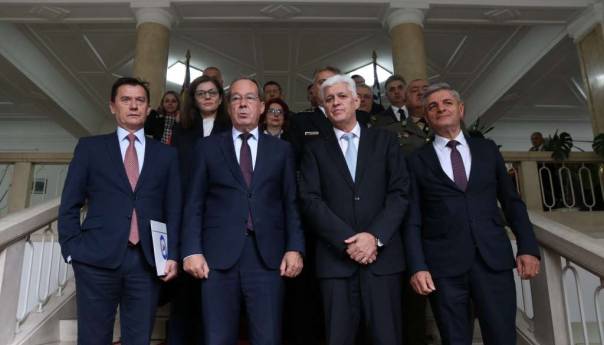 The meeting of the delegations of the defense ministries of the two countries was an opportunity to exchange opinions regarding current global security threats and risks, with a focus on preserving the regional and stability of BiH.

They discussed the strengthening of bilateral defense cooperation and the security challenges that Europe and the world are facing, as well as the “sensitivity” of the Southeast European region, including in that context the importance of the continuation of the EUFOR mission in Bosnia and Herzegovina.

Minister Stoyanov pointed out that Bulgaria has continuously provided and continues to provide support to the EU integration process of the countries of the Western Balkans.

“We support and encourage Bosnia and Herzegovina to continue with reforms on the way to EU integration, as well as in the context of Euro-Atlantic integration,” said Stoyanov after the meeting at the BiH Ministry of Defense.

He underlined that preserving stability in the countries of the Western Balkans, as well as promoting their EU and NATO perspective, are priorities for Bulgaria, stating that good neighborly relations and regional cooperation are of essential importance for the process of enlargement of the European Union.

He also emphasized that Bulgaria continues to provide continuous support to the EUFOR mission ‘Althea’, and that this mission plays a key role in preserving the stability and security of Bosnia and Herzegovina and the region as a whole.

“The extension of the existing executive mandate of Operation Althea, which expires in November of this year in the UN Security Council, is more important than ever, taking into account the drastically changed security situation,” said the Bulgarian Minister of Defense.

Responding to a journalist’s inquiry regarding the possible increase in the number of members of the Bulgarian contingent within EUFOR, and in the context of the current security challenges, Minister Stoyanov said that Bulgaria is currently participating in the mission with a composition of reserve forces totaling 106 members/staff, with twelve people at their headquarters.

With the satisfaction expressed on the occasion of the visit of Minister Stoyanov and the delegation, Minister Podžić said that the meeting was an opportunity to exchange opinions on issues related to the further improvement of bilateral cooperation and the extension of EUFOR’s mandate in November this year.

He reminded that Bulgaria is among the countries that have the largest contingent within EUFOR, expressing gratitude for that occasion.

At the same time, Podžić reminded NATO’s position that the continuity of the mission of international forces in Bosnia and Herzegovina cannot and will not be interrupted in the event of a veto regarding the extension of the mandate of EUFOR, that is, the Althea operation/mission.

“What kind of solution will be found remains to be seen. For the most part, we have firm guarantees that what was done in the post-war period in Bosnia and Herzegovina, the international community is not ready to sacrifice by not continuing any form of mission,” said Podžić, stating that Annex 1a of the Dayton Peace Agreement states that NATO is responsible for the implementation of the military part of that agreement in Bosnia and Herzegovina. – alliance.