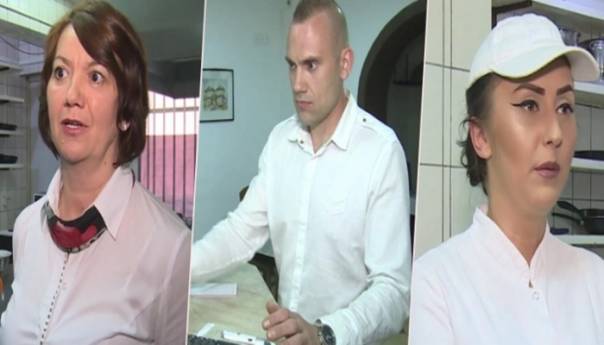 Within the Tuzla Criminal-Correction Institution, the restaurant ‘Sadrvan’ has been successfully running for years. Prisoners who are convicted with the appropriate behaviour are the ones who prepare meals, Vijesti.ba news portal reports.

For eight months, Mevlida Mujic and Dragica Nikolic have been working in the kitchen of the restaurant ‘Sadrvan’. When Mevlida Mujic came to serve a sentence in the Tuzla prison she did not have too much experience in culinary, however, now she is the assistant to Dragica in the kitchen.

“The hardest thing to me was to learn how to make a pizza, but I did, and I am often praised by other convicts,” Mevlid said.

What is also good for prisoners is that they can earn money by working in restaurants.

The convict in ‘KPZ Tuzla’ Davor Rangl says he likes the fact that days in prison are passing faster.

The measure of re-socialization definitely has this effect on me,’ says Rangl.

One of the frequent guests of the restaurant ‘Sadrvan’ in which the convicts work is Mensur Rahmanovic who says he is satisfied with the service as well as the price and quality ratio of food.

“The food is great. There is no faster and better service in the Tuzla Canton, “Rahmanovic said.

Restaurant manager Dragica Nikolić is proud of the fact that the restaurant “Sadrvan” has successfully organized hundreds of events such as celebrations, weddings and jubilees, which is why they represent serious competition with other restaurants that exist in the area of Tuzla.