The mayor of Sarajevo, Benjamina Karic, informed the public that the Prosecutor’s Office of Bosnia and Herzegovina (BiH) has opened a case related to the documentary film Sarajevo Safari, specifically the unknown persons mentioned in the film.

Moreover, the Prosecutor’s Office of BiH informed the mayor that a prosecutor has been appointed in this case.

”An acting prosecutor in the Special Department for War Crimes has been appointed, who in the coming period, together with partner institutions and agencies, will take the necessary measures to verify the allegations from the report. After the prosecutor’s decision is made, you, as the applicant, will be informed about it in writing,” stated the Prosecutor’s Office of BiH.

To recall, at the end of September, the mayor of Sarajevo, Benjamina Karic, officially filed a criminal complaint against the unknown persons who spread death in Sarajevo and their helpers, as well as the responsible persons of the aggressor army.

”I consider it the right thing to do and my duty to react in this way to the facts presented in the documentary film ”Sarajevo Safari” directed by Miran Zupanic, according to which foreign citizens – ”bounty hunters” were paid to shoot innocent civilians during the siege of Sarajevo,” Karic stated. 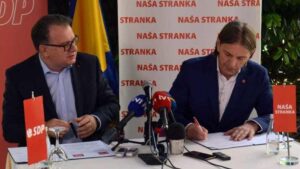