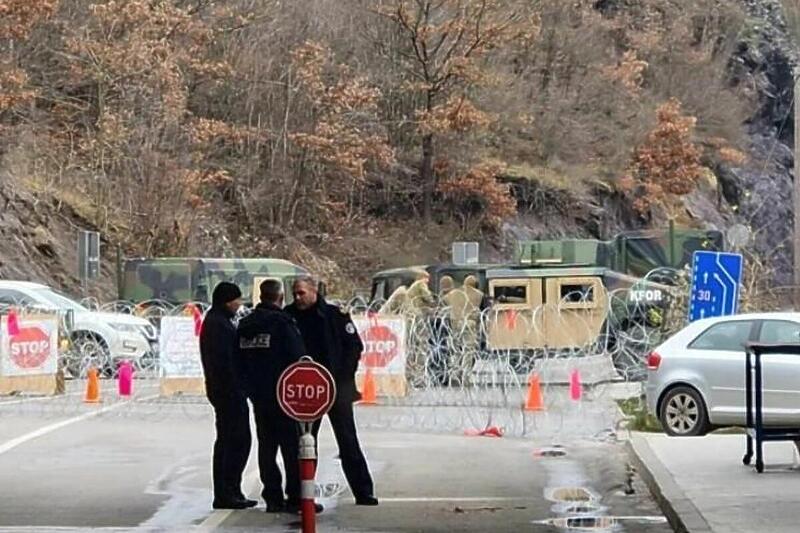 Several dozen men in dark clothes and with masks gathered during the weekend at the Jarinje border crossing, from where they wanted to cross from Serbia to Kosovo, but the police stopped them. Balkan Investigative Reporting Network (BIRN) Bosnia and Herzegovina (BiH) has identified at least five far-right organizations and movements whose signs were displayed on Sunday.

Less than seven days after far-right organizations announced that if the Serbian authorities remain silent on roadblocks in Kosovo, they will go to Jarinje themselves, several dozen men answered the call of the ”People’s Patrol” (”Narodna patrola”)and appeared on Sunday at the border.

At the Jarinje border crossing, without hiding his face, Damnjan Knezevic, the leader of this organization, stated in a confrontation with the police that ”we did not come to push with you”.

The gathered tried to reach the border, but the Serbian police stopped them, and then members of the Kosovo Force (KFOR) peacekeeping forces set up patrols and barbed wire on the other side of the border.

BIRN BiH reviewed the photos and videos published on social media and found on them a whole series of signs of pro-Russian and far-right organizations and some of their members – from a motorcycle club with right-wing symbols to a xenophobic anti-migrant organization from Belgrade with ties to a Russian military formation participating in the war in Ukraine.

The gathering was also attended by representatives of the ”Hrabro za Kosmet” (Brave for Kosmet) organization, which for years – as a humanitarian organization – has been collecting aid for Kosovo. On December 12th, at a protest in Belgrade, they said that they were proving that they stand for the people of Kosovo and Metohija.

”Hrabro za Kosmet”, after the invitation to the protest, sold badges for ”helping the children of Donbas”, produced in Russia.

On the badges sold by ”Hrabro za Kosmet” there is the image of Ratko Mladic, former commander of the Army of the Republika Srpska (VRS), who was sentenced to life imprisonment for the genocide against Bosniaks from Srebrenica in 1995, the persecution of Bosniaks and Croats throughout BiH, terrorizing the population of Sarajevo during the siege of the city and taking members of United Nations (UN) peacekeeping forces hostage.

In several photographs at the protest in Jarinje, people were seen in jackets with the inscriptions ”MC Serbs Serbia” and “Support MC Serbs”.

This motorcycle club, with branches in Serbia and RS, has the ”Totenkopf” symbol on its vests – a skull with crossed bones behind, which was used as a symbol by the Nazi SS Totenkopf division during World War II. According to experts, this symbol is a direct allusion to Nazism and the worship of the Third Reich, Detektor reports.

A panel Discussion ‘Candidacy Status of BiH: The voice of civil society’ held in Sarajevo
Next Article