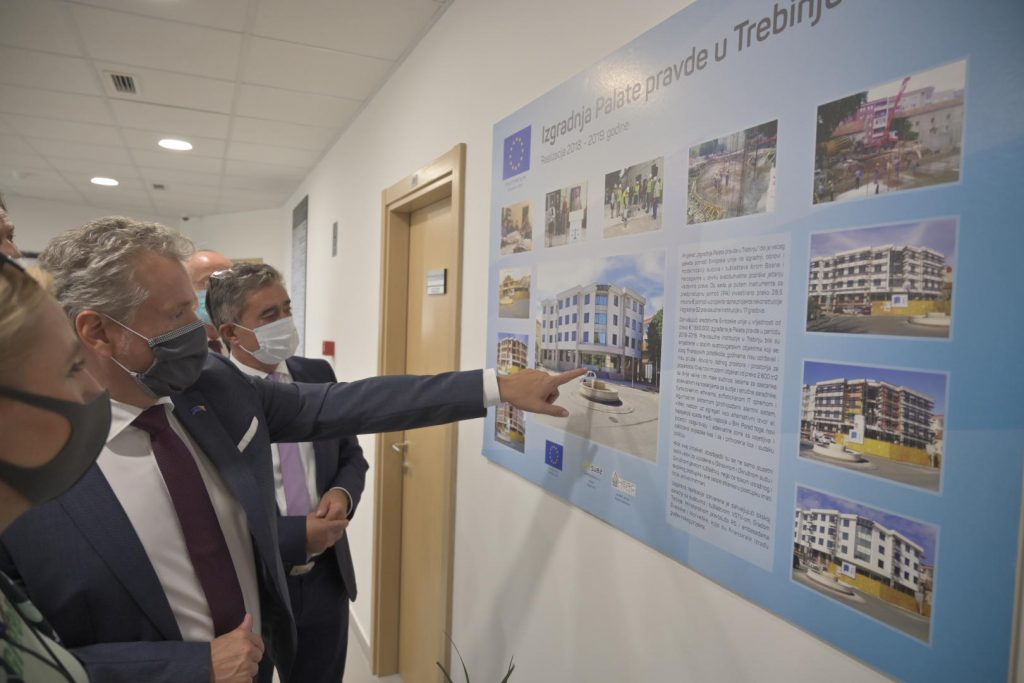 Head of the Delegation of the European Union and EU Special Representative in BiH Ambassador Johann Sattler and  Minister of Justice of Republika Srpska Anton Kasipović today officially opened the newly constructed building of judicial institutions in Trebinje,  funded by the European Union with 1.6 million euro. The Courthouse that accommodates the District and Municipal Courts and the District Prosecutor’s Office is designed and equipped in line with the highest EU standards.

Ambassador Sattler stressed that the rule of law is the foundation of any democratic society and the core value of the European Union. “Rule of law is the basis of a fair and democratic society, but it is also about living decently. It is about bringing perpetrators to justice and trials conducted by an independent and impartial judiciary. It is prerequisite to economic development and fight against  corruption…  This building secured to deliver justice but for rule of law to take root, the quality of the judiciary is essential,” said Ambassador Sattler.

Trebinje Courthouse is a part of the wider EU assistance package of over 28 million euros aimed at the rehabilitation and modernisation of 32 courts and prosecutor’s officers in 17 cities across Bosnia and Hercegovina to ensure premises that can enable equal access to justice, and the proceedings completed in a reasonable time.

Anton Kasipović, Minister of Justice of the RS, thanked the donors and the judicial professionals for their involvement in ensuring the realisation of the project. “There is a reason this building is called the Palace of Justice. However, buildings do not make justice. It needs to be rooted in law and a firm decision that we will work and function according to it. Justice needs to be part of our consciousness,” stressed Minister Kasipović, adding that “We can always do better. Now there are no technical obstacles to quality work that focuses on the needs of the citizens of Trebinje and indeed Herzegovina.”

As part of his visit in Trebinje region, Ambassador Sattler visited a number of the EU-funded local initiatives and projects aiming to save existing and open new jobs in tourism and gastro industry. This included a visit to the Vukoje winery, one of the beneficiaries of the EU4Business project, and a tour around the city with the boats whose reconstruction which ensured via the EU cross-border cooperation program.

Ambassador Sattler also met local youth activists involved in a production of the ‘Awakening Solidarity’ mural designed by young artist Rikardo Druškić, and with a group of journalist travelling around the region as part of the OdmoriuBiH initiative promoting domestic tourism. Both projects were supported by the EU.