The President of the Homeland Forces Movement, Ahmed Husagic, presented the results of the diaspora voting in the General Elections in Bosnia and Herzegovina (BiH) held on October 2nd this year.

”It’s not the way we wanted, but it’s the way we expected. After many years, we made a step forward. We stopped the decline in the votes of the pro-Bosnian political forces, which was the primary goal. And not only did we stop it, but on some levels, we managed to significantly increase it. Of course, if we take into account how many people have the right to vote and live abroad, we cannot be satisfied. We must continue to work on this because the fate of all of us depends on the fate of BiH,” Husagic said.

As for the elections for members of the BiH Presidency from the Federation of BiH (FBiH), in the 2018 elections, 15.610 voters voted for pro-Bosnian candidates.

”In this year’s elections, that number almost doubled, so 28.369 people trusted them,” Husagic states.

As he says, when it comes to ”anti-Bosnian candidates”, they received the support of 6.786 voters in these elections, which is twice less than the number they received in the 2018 elections.

In the elections held in 2018, the pro-Bosnian forces did not have their own candidate for a member of the Presidency from the Republika Srpska (RS), Husagic says.

”At that time, 29.403 votes came from the diaspora for the anti-Bosnian candidates. In these elections, the number of their voters was reduced several times. Only 9.964 supported those forces. On the other hand, the candidate from the Movement for the State received 10.973 votes. This is the best result not only in the RS Entity but also at the level of the entire country,” he adds.

In the end, he pointed out that the turnout would have been much higher if the Central Election Commission (CEC) had not changed the rules regarding registration one day before it began.

”Our activity and our energy were not only focused on motivating people to vote, but also on educating them on how to register. Also, technical difficulties accompanied the entire process. The CEC should be praised for introducing the mandatory attachment of a certificate of residence abroad during registration. This prevented the abuses that followed the previous elections. Unfortunately, a large number of people who wanted to vote were unable to do so for various reasons. About 20.000 people started to register, and opened an account but did not complete the process. About 20.000 people completed the process but were rejected for various reasons. An additional 20.000 did not vote due to negligence, but mainly because the ballots arrived during the annual holidays. Since they were not collected on time, they were returned to BiH. Also, the mail that was supposed to arrive from Australia did not arrive on time due to the long journey,” Husagic explained.

Finally, his subjective opinion, for which, as he says, there is no evidence, is that there are several messages from people who entered their data in the first registration form but never confirmed the email they received from the CEC.

”Such persons did not fall into any of the categories I mentioned above. In the end, we have between 60.000 and 80.000 people who were willing to vote but did not succeed. We must work on this so that all of them finally realize their desire to participate in the vote. Taking all of the above into account, it is obvious that there is potential, that there is desire, and that there are foundations for further construction. We hope that those who are in power, regardless of what level, will continue what has been started and that the continuity of work with the diaspora will be established because there is no alternative to this work. The work is not easy, but it is necessary,” Husagic concluded, Klix.ba reports.

Dodik: Significant Number of new People in the new Government
Next Article 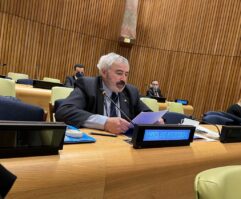