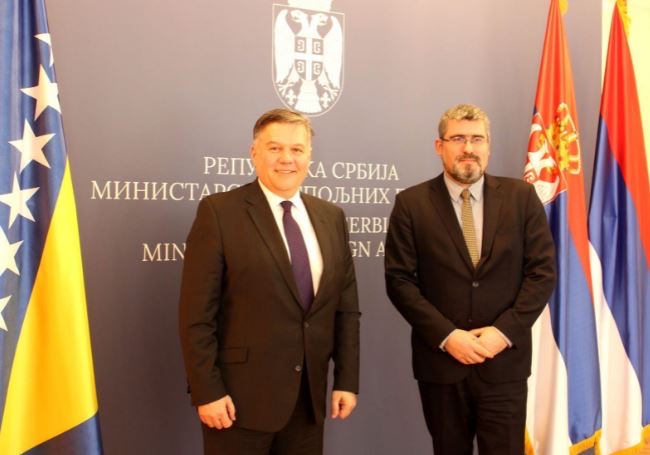 Deputy Minister of Foreign Affairs of Bosnia and Herzegovina (BiH) Josip Brkic and State Secretary of the Ministry of Foreign Affairs of Serbia Nemanja Starovic agreed yesterday that good bilateral relations are of primary importance, not only for both countries but for the entire region.

During the bilateral political consultations in Belgrade between the two Ministries of Foreign Affairs, it was mentioned that BiHand Serbia want to have good and constructive cooperation in joint efforts to overcome all barriers to their good relations.

The topics of the mentioned consultations were bilateral relations, European, and Euro-Atlantic integration, as well asregional cooperation, the Ministry of Foreign Affairs of BiHannounced.

It was stated that there have been certain open issues between the two countries for many years, which need to be resolved at the political and expert level.

In this regard, the work of interstate commissions for borders, departmental cooperation, cooperation in the field of international legal assistance, and the continuation of activities on concluding bilateral agreements in the procedure were supported.

The interlocutors agree that it is necessary to continue and intensify activities in the field of economic cooperation and infrastructural connections. When it comes to strengthening economic cooperation, both sides emphasized the importance of the Sarajevo-Belgrade-Sarajevo highway construction project, as one of the successes of the economic trilateral.

Brkic stressed that BiH is committed to maintaining good neighborly relations with all countries, as well as intensive regional cooperation in our region within various initiatives and forums, but also bilateral meetings at all levels.

During the consultations, experiences and information regarding the European path of BiH and Serbia were exchanged, and the possibilities of strengthening cooperation in the field of European integration were discussed.

Also, the current security, energy, and economic situation in the region were discussed at the meeting, with an emphasis on the challenges facing the countries of the region in the light of events in Eastern Europe.

Both sides expressed readiness to continue the high-level dialogue after the extraordinary parliamentary and local elections in Serbia, scheduled for April 3rd, and after the formation of the new government, especially in the part concerning cooperation between the Ministries of Foreign Affairs and the possibility of holding a second session of the Council of Ministers of BiH and the Government of Serbia.

A clear Message from the EU Commissioner: Money must be provided for the Elections
Next Article