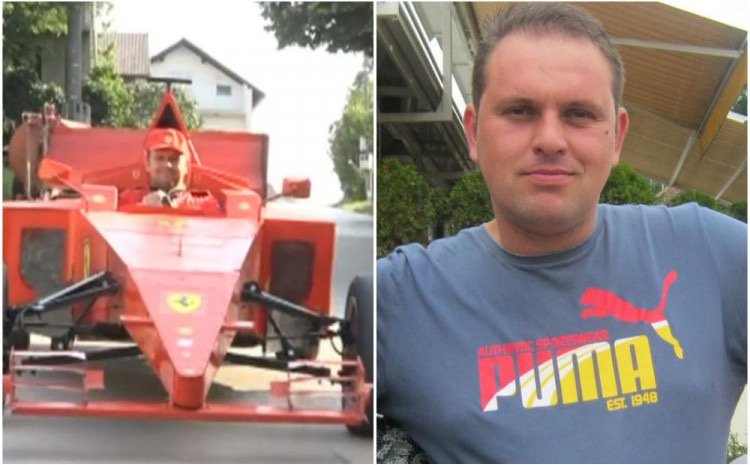 Formula 1 car is the highest class of single-seater in motoring approved by the International Automobile Federation, and there are fans of this vehicle in Bosnia and Herzegovina (BiH). One of them is Anis Hadzikadunic from Makljenovac near Doboj. He made a “Ferrari”, collecting parts mainly on the wrecking yard, he increased it by 43 times.

As Anis Hadzikadunic explained, he always had the desire to attend the Formula 1 competition, but as it was impossible, as he says, he “needed” a toy, everything started after the toy.

He worked on his own

”For a while, I thought about how I would do it. Then I magnified it. Each part when magnified gets, actual length, actual width. I was looking for the highest quality materials to achieve weight. In the end, it turned out that there was a 1.6 turbo diesel engine inside. All that is left now is to make polyester on it,” Hadzikadunic pointed out.

Furthermore, he added that there are still some details to be done. He pointed out that he did everything in the garage, which is part of his house.

”I made a racing car for less than two years, but it didn’t last every day. I mostly did this when I had free time, after 5pm. So,it lasted for almost two years,” he stated.

He added that he did not have the help of family and friends, but did everything himself with his own hands. He stressed that he used a machine from a company from Doboj.

He reached his goal

”I made everything from car waste part. No part is the same. I paid attention that everything fits, what can be changed, added. The rule was to reach the final goal,” he said.

He emphasized that he likes fast driving and that he has always been interested in this type of driving. He says he enjoys it.

”The love for cars lasts from a young age. I’m a car lover. I never went to races. I did not have the opportunity, although I have now acquired all the conditions. Now I could go,” he concluded, Avaz writes.

ITA prevented the Illegal Sale of Cigarettes worth 5.5 Million BAM
Next Article