HDZ BiH party President Dragan Covic told Christian Schmidt today that equality and non-discrimination of the three constituent nations and other citizens are of utmost importance.

“I am sorry that Bosnia and Herzegovina is perceived as a country that does not have enough domestic strength to implement reforms,” Covic wrote on “Twitter”.

He had a phone conversation with Schmidt about possible changes to the BiH Election Law.

The electoral law is again in focus – this time in the context of the possible imposition of changes. Namely, there are rumors that during this week, the high representative in our country, Christian Schmidt, could also use the Bonn powers on this issue. This is a sign of alarm for the political leaders in our country, especially because of the information that potentially imposed changes to the Election Law would favor HDZ’s proposal. Does it really follow the imposition of the Electoral Law and in whose favor?

Will Schmidt use the Bonn powers once again and impose the Electoral Law? It is a question to which an answer has been sought since yesterday. And it’s still not there. It’s official. Additional confusion was introduced by the consultations he held today with representatives of parliamentary parties in the Federation. The Office of High Representative is cautious, they say they do not want to comment on media rumors.

The High Representative in our country held consultations today with representatives of political parties in the Federation. After the announcement of certain representatives in the parliament that these consultations are being conducted in the direction of imposing changes to the Electoral Law advocated by the HDZ-BiH, many reacted. Mostly judge…

“I can’t say that there was any talk about the imposition of the Electoral Law, there were talks about problems that we all see – not only the high representative, not only those of us who deal with politics, but also citizens. It is a question of protecting the integrity of the electoral process, as well as a question of possible blockages and removing those blockages, so that we all think about these problems, how to solve them. The High Representative wanted to hear our thoughts about all that, our fears, whether the campaign has started, how and in which direction it is going. We agreed to meet again and continue to talk about that topic”, said SDP party president Nermin Niksic said.

Presidency member Zeljko Komsic also attended the consultation. He was among the first to react to the announcement of the possible imposition of the Electoral Law, warning Schmidt that no decision made against the will of the citizens of BiH can go without consequences. But also with a reminder of the request awaiting the Constitutional Court’s decision:

“Member of the BiH Presidency Zeljko Komsic has sent a request to the Constitutional Court of Bosnia and Herzegovina for an evaluation of the constitutionality of the manner of decision-making and jurisdiction of the House of Peoples, especially from the point of view of initiating a vital interest, which represents tool for blockages, and the appeal of dr. Slaven Kovacevic according to the European Court of Human Rights in Strasbourg, which concerns the active right to vote, that is, the method of election to the House of Representatives of the Parliament of BiH, the Houses of Peoples and the Presidency of BiH”.

And it is precisely the Houses of the People that are the problem, the key. Because they have been a lever for controls for years. Which HDZ BiH had until now. On both levels. And if their proposal to amend the Election Law is accepted or imposed, as some political representatives announce, the House of Peoples will continue to be a bastion that the HDZ does not give. And not that at the federal level a seat in the House of People belongs, for example, to a Croat from USK or BPK, if he is elected to the cantonal assembly.

“My information and understanding says that the Election Law will be amended in several segments. The segment that worries me and our party the most is the segment related to legitimate representation, which the HDZ de facto stood for during the negotiations on the constitutional electoral reform. If you make a decision that only the cantons where Croats are dominant will give delegates to the federal House of Peoples, then you are tying their collective ethnic rights to a specific territory and that is quite certain, at least in my eyes, further ethnicization of the country”, warns Our Party representative Predrag Kojovic.

The SDA does not want impositions at a time when elections have already been announced.

“Now it is inappropriate to even talk about changes to the Electoral Law when we need to enter the election campaign itself. If it is true that they are talking, it should be stopped. This is irresponsible, frivolous and very dangerous when it comes to BiH and the political system. This is a very serious intervention, it is not only necessary to amend the Election Law of BiH, but also to amend the Constitution of BiH, which states that all those elected to the cantonal assemblies have the right to be elected to the House of Peoples”, says Adil Osmanovic , President SDA Club in the BiH House of Representatives.

Everything else is serious, deeper segregation, which does not lead to the implementation of judgments of the European Court of Human Rights, according to our interlocutors. And it is not only the House of Peoples that is part of the amendments to the Electoral Law, which some political representatives say could be imposed. There are also those changes that are colloquially called technical, and refer to the integrity of the electoral process. SDA leader Bakir Izetbegovic also discussed this with Schmidt. He said that “urgent changes related to the integrity and functionality of the federation are acceptable”.

For now, only one thing is clear, the Electoral Law as a topic has been brought back to the big door again. And October is getting closer, Federalna writes. 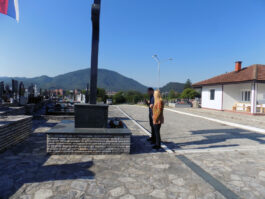