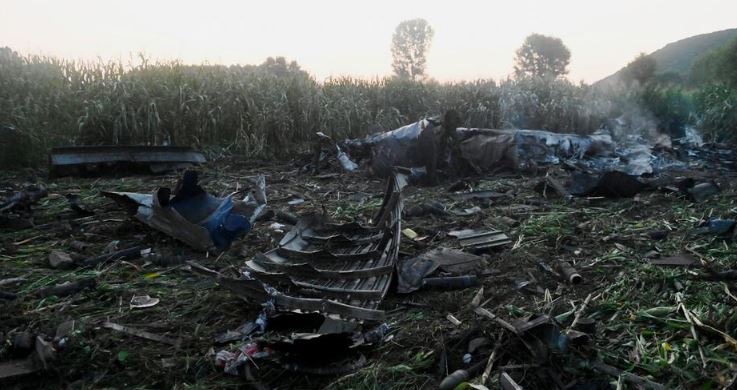 The plane from the era of the Soviet Union that crashed in Greece, killing eight crew members, was transporting Serbian weapons to Bangladesh through a company based in Bosnia and Herzegovina (BiH) and owned by a Polish arms company, the Balkan Investigative Reporting Network (BIRN) has learned.

It was revealed that the Polish arms trading company Metalexport-S is behind a shipment of 11.5 tons of ammunition that was transported from Serbia to Bangladesh by an Antonov An-12 transport plane that crashed this month near the Greek city of Kavala.

Namely, the broker in this business, in which the ultimate user of the ammunition is the Ministry of Defense of Bangladesh, was BiH company “BA-Metalexport” from Sarajevo, which isowned by the Polish company “Metalexport-S”.

“That’s right, we are 100 percent owned by a Polish company. They run the business, and we are in charge of this area,” Alen Djuzel, director of the company in BiH, told BIRN.

Djuzel denies the speculations that the weapons were intended for Ukraine, and they arose because the Antonov An-12 plane, which transported the goods, is the property of the Ukrainian cargo airline “Meridian”.

“The agreement with Bangladesh was signed in 2021, before the war in Ukraine started,” said Djuzel.

The chain of companies involved in the business is even longer – the state-owned Serbian weapons factory “Krusik” is the manufacturer of ammunition, while the Serbian private company “Valir”, which was responsible for the cargo, received a Serbian export license for Bangladesh on behalf of BiH companies.

When asked why “BA-Metalexport” went through the company “Valir” and did not do business directly with Krusik, Djuzel replied that it was not possible and that it had to be done through a broker.

”The Ministry of Defense of Bangladesh is our customer. We could not buy directly from the factory, because they have their own brokers. “Valir” was a broker, they offered us what we needed,” he told.

Initial speculation that Serbia was exporting the arms to Ukraine was denied right after the crash by Defence Minister Nebojsa Stefanovic, who said that the only link with Ukraine was the fact that a Ukrainian company, Meridian, was the owner of the plane that was transporting the Serbian-made cargo.

”The customer was the Ministry of Defence of Bangladesh, as a fully authorised end user. This flight had all the proper permits and everything was in accordance with international regulations,” Stefanovic told media on July 17th.

Asked by BIRN how it was worthwhile transporting this relatively small amount of arms by plane, the director of BiHcompany BA-METALEXPORT explained it was necessary to meet the deadline agreed with Bangladesh, Detektor writes.