The Ministry of Economy of Sarajevo Canton, which is responsible for issuing, renewing and revising licenses issued to tourist agencies, tasked the Directorate for Tourism to start sorting and creating a register of issued licenses, in order to establish a system that will function.

At the beginning of June of this year, the Minister of Economy of Sarajevo Canton, Adnan Delić, after the competitive procedure, appointed the director of the Directorate for Tourism, which officially started the work of this directorate, even though it was founded in 2008.

“The Ministry did not have a sector that dealt exclusively with tourism, even though it is one of our most developed branches of the economy. Everything related to tourism is necessary to put in order and create a system that will work and with which all users of our services will be satisfied. Therefore, one of the first steps taken by the Directorate for Tourism is the revision of licenses issued to tourist agencies whose licenses have expired or are about to expire,” Minister Delić explained.

He stated that the Ministry of Economy, i.e. the Directorate for Tourism, asked the Cantonal Administration for Inspection Affairs to check whether irregularities in the operations of 29 tourist agencies whose licenses have expired, or are about to expire, have been determined in the previous inspection procedures, in order to the further course of the audit could continue unhindered.

“After inspecting the work records of market and tourist inspectors, it was determined that, as of October 21, 2022. year, no irregularities were found and no measures were taken against these agencies, which is enough for us to continue the audit so that it ends as soon as possible, and the agencies’ licenses are extended”, the minister added.

He also emphasized that the agencies can carry out their activities unhindered while the audit process continues, and the Tourism Directorate will inform them of the need to submit requests and necessary documentation for the renewal of licenses.

“Agencies that have previously submitted documentation will not have to submit it again if it is complete. If the documentation is incomplete, they will submit only the missing documentation,” the minister emphasized.

Revision of licenses is a legal obligation of the Ministry of Economy every three years, in accordance with Article 25 of the Sarajevo Canton Tourism Law. In the new Law on Tourism, the proposal of which is being prepared, the validity of licenses has been increased from three to five years with the aim of reducing the costs and obligations of the tourism workers arising from license renewal procedures. 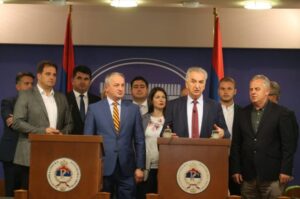