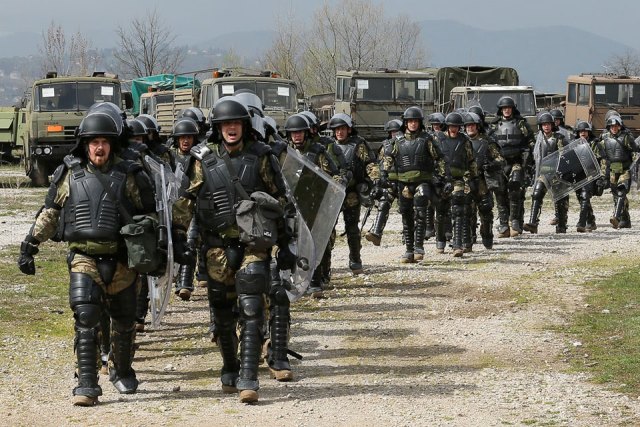 On Thursday 5 April, the Armed Forces of BiH Barracks in Rajlovac, just outside Sarajevo, was the location for an important EUFOR exercise. The exercise was designed to test the ability of the Multinational Battalion to undertake complex and interrelated public order missions, in realistic scenarios.

The Multinational Battalion frequently conducts exercises to ensure that it is fully able to is ready and prepared to react should the safe and secure environment in BiH be threatened. This exercise was one of the more complex routine exercises EUFOR undertakes, with multiple tasks and scenarios to be dealt with at the same time by just one Company. This was why the space afforded by AFBiH Rajlovac Barracks was particularly useful.

The scenario included extensive use of Crowd and Riot Control (CRC) techniques. Following a threat posed from within an angry crowd, the Hungarian Company had to regain control of the situation to prevent further violence and ensure the safe evacuation of people who had been trapped by the violent crowd. Following the speedy and well-executed evacuation, the troops had to prepare a helicopter landing site and air-lift a severely injured casualty to the EUFOR medical facility.

This training exercise provided the opportunity to practise these important and relevant skills, and display the Hungarian Company and Multinational Battalion’s capability and readiness to support the authorities of BiH in ensuring a safe and secure environment.
The Commanding Officer of the Multinational Battalion, Lieutenant Colonel Markus Schwaiger said: “The Hungarian Company did well and the given tasks were successfully fulfilled. In particular, the troops did well with their Crowd and Riot Control techniques, and the very fast evacuation of someone in an emergency situation. This exercise was also a truly multinational one, with troops from Hungary, Austria and Turkey training together to achieve a common goal – the maintenance of a safe and secure environment.”