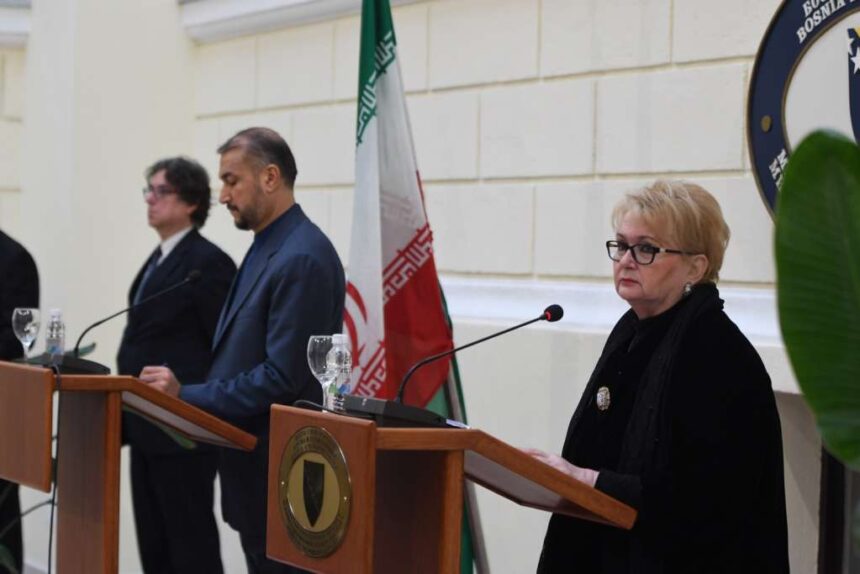 Ministers of Foreign Affairs of Bosnia and Herzegovina and the Islamic Republic of Iran, Bisera Turković and Hossein Amir Abdollahian, emphasized the friendly relations between the two countries after the meeting in Sarajevo. Iran’s foreign minister announced the continuation of his country’s support for Bosnia and Herzegovina.

Addressing the journalists, the interlocutors recalled Iran’s support for Bosnia and Herzegovina not only in its most difficult moments and emphasized the need for greater trade between the two countries.

Minister Abdollahian expressed his satisfaction that this exchange has increased, according to him by 53 percent after the most difficult period of the global pandemic COVID-19.

He emphasized the principled Iranian approach of supporting the territorial integrity of Bosnia and Herzegovina, the preservation of integrity, as well as the coexistence of all peoples.

At the meeting with Minister Turković, he added, there was also talk of sanctions against Iran as part of the nuclear agreement, and Iran’s Foreign Minister expressed concern over the situation in Ukraine and opposition to the continuation of armed conflicts and human rights violations not only in Ukraine but also in other countries.

The Minister also said that the actions of the United States of America and other Western countries are unacceptable when it comes to Iran, especially in the area of human rights violations and existing international standards.

Answering the journalist’s questions, he stated that the disturbing images of the suffering of people in Iran in recent weeks are the peak of foreign interference, causing disorder in his country, as well as planned terror. Not a single person in Iran was killed by the local police and law enforcement, while 67 members of the police were killed by elements that were thrown in, said the Iranian head of diplomacy and added that “the Americans want energy, oil and gas in Iran, which is why the current campaign has been launched.”

Minister Turković, emphasizing the friendly ties between the two countries, said that on January 25 next year it will be 30 years since the establishment of diplomatic relations.

She confirmed the talks with her Iranian colleague on all issues of common interest of the two countries, the situation in Bosnia and Herzegovina and regional and broader global topics.

“The foreign policy position of Bosnia and Herzegovina is clear as a small country that has chosen the Euro-Atlantic path, although this process is not always simple,” added Turković.

The officials also discussed the energy crisis in the world, growing inflation and possibilities for alternative sources and gas supply contracts.

The priorities are the candidate status for membership in the European Union and getting closer to membership in the NATO alliance, said the minister, presenting Bosnia and Herzegovina’s positions, and expressed the hope that the partners within the European Union recognize how important the stated goals are for the stability of Bosnia and Herzegovina, as well as the region.

According to Minister Turković, today she also talked with her Iranian colleague about the current political situation of the host country and informed him about the recently held elections, the results and the process of forming the post-election authorities.