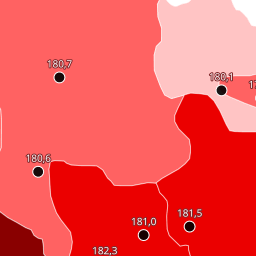 According to the new study conducted by the American Council on Science and Health (ACSH), the tallest people in the world are Herzegovinians.

Previous research placed the Dutch at the top of the list, but the last research, which was led by Paul Grasgruber from the Czech Masaryk University, showed that in some parts of BiH – men are even taller.

The study included 3192 men aged 17 to 20 years, from a total of 37 cities in BiH. The map shows the average height in each region.

The study notes that the tallest people are coming from Capljina, where the average height of men aged 17 to 20 years is 185.9 cm.

One factor of height is a genetic factor Y haplotype I-M170.

Studies show that the increase of this genetic profile is linked to the growth of height of that population.

A total of 35% of men in the Netherlands has this genetic profile and more than 70% of men in Herzegovina.

According to these results, the average Herzegovinian could be even 190 cm tall.

The answer to the question why their average height is not that high, scientists found in another factor – diet – as stated in the study based on the research “The mountains of giants: an anthropometric survey of male youths in Bosnia and Herzegovina”.

In countries where diet is rich in protein from pork, dairy products, eggs and fish – men are taller. Those who get most of the protein from grains are shorter.

Research has shown that a diet of the Dutch people is rich in protein, while Herzegovinians do not eat as much protein and therefore they do not reach their full genetic potential for height.