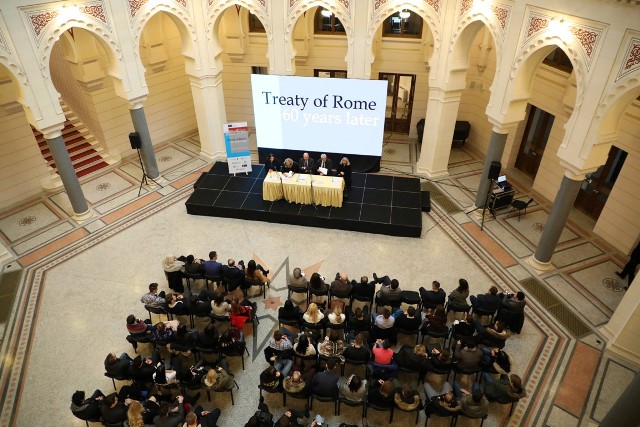 The panel titled “Treaty of Rome – 60 years Later: Four Freedoms in Everyday Lives of Citizens” was held today in the City Hall as one of the activities within the project “Rome and Sarajevo for Europe”.

The panelists included the academic Mirko Pejanović, Azra Hadžiahmetović Ph.D.Econ, Edin Dilberović, Director of the Directorate for European Integration, and Lejla Ramić Mesihović on behalf of the Foreign Affairs Initiative, with Nedžma Džananović in the role of mediator. The panelists discussed the geopolitical, economic and administrative aspects of the EU enlargement, and drew interesting parallels between the time when the European Union was formed and the present period focusing on the processes that our country had gone through until now and what is to be expected in the forthcoming period in the process of enlargement.

The City of Sarajevo in partnership with the City of Rome and other partners is implementing the project “RoSaE”, financed within the framework of the programme “Europe for Citizens”. The project implementation, which started in 2017 has specific significance since last year marked the 60th anniversary of the signing of the Treaty of Rome” said Dragana Solaković, Assistant to Mayor .
The project aims to raise awareness of the citizens of Rome and Sarajevo about the importance of the four freedoms introduced under the Treaty of Rome from 1957, and their contribution to the development of multicultural, democratic and free Europe in which people could live peacefully.

The today’s panel was held within the framework of project activities, which also include the training of civil servants on the same topic in May. A study visit to the European institutions in Brussels is also planned.