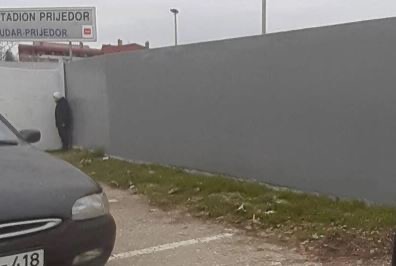 Assistant Chief of the Prijedor Police Department, Zoran Indjicstated yesterday that it is very important that, according to the information available to the police so far, there are no elements of the organization in the negative phenomenon of writing graffiti with offensive and inappropriate content in Prijedor.

“Yesterday, there was an unpleasant event, two graffiti of inappropriate and offensive content. According to Article 359 of the Criminal Code of Republika Srpska (RS), it is public provocation and incitement to violence and hatred. I can say that we have data on individuals who have committed similar acts before and are prone to it, “Indjic said yesterday at a session of the Prijedor Community Security Forum.

He noted that the police are working intensively to resolve this crime and that the graffiti was removed immediately after it was reported.

”We have information from citizens, we are very grateful for this cooperation, which is extremely useful, especially when it is timely. It is always useful to repeat that the number 122 is available for anonymous applications, which was not the case before, and we all hope announced video surveillance, ” pointed out Indjic.

The President of the Assembly of the City of Prijedor, Mirsad Duratovic (DF), stated that he received a video from a citizen of Prijedor showing a person making graffiti and that the video was forwarded to the authorities.

“This example of civic responsibility should be emphasized and promoted through the media to show how important the cooperation of citizens is, which often leads to the discovery of the perpetrators of these and other crimes,” Duratovic emphasized.

“The Forum believes that the competent institutions, in accordance with their powers and the Action Plan for the Prevention of Incidents and Crimes Committed from Hate and Prejudice, have taken necessary and legally prescribed measures and actions, condemned incidents, informed the public in a timely manner, and removed inappropriate graffiti,” Vanja Dejanovic, Forum Chairperson, explained to reporters in Prijedor.

On Wednesday, December 22nd, the police were informed that insulting graffiti was written on the fence of the city stadium in Prijedor during the previous night, and the District Public Prosecutor’s Office qualified this as a criminal act of public incitement and incitement to violence and hatred.