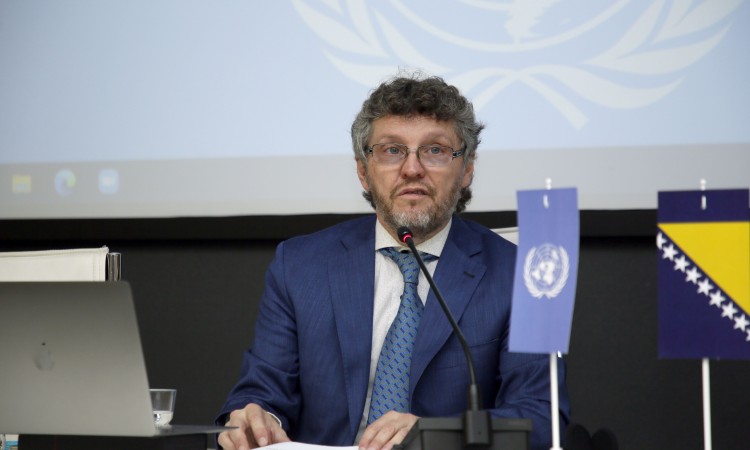 The glorification of war criminals and denial of genocide, war crimes, and crimes against humanity, including crimes of sexual violence committed during the last war in Bosnia and Herzegovina, must stop.

This was stated at a press conference in Sarajevo by Fabian Salvioli, the United Nations (UN) expert on transitional justice and the special rapporteur for the promotion of justice, reparations, and guarantees of non-recurrence of crimes.

He addressed reporters with the intention of presenting preliminary conclusions based on his own observations during a seven-day visit to Bosnia and Herzegovina that ends today on International Human Rights Day. In September next year, the final report will be presented to the Human Rights Council in Geneva.

According to what he told reporters today, the preliminary conclusions are full of details about the injustice towards the victims of such crime and their families.

Salvioli expressed sympathy with all the victims at the press conference.

He called for the establishment of effective mechanisms for compensating victims and for faster and equally effective punishment of deniers and perpetrators of genocide as well as all other war crimes, including sexual abuse, regardless of where the crimes were committed and who the perpetrators were.

He also appealed for an urgent acceleration of the search for more than 6,000 people who are still in the records of missing persons and whose families are searching for them.

He also called for equal access to transitional justice and the marking of places of suffering regardless of the religious or any other affiliation of the victims; to respect the right of families to information on the search for their missing members, as well as to establish a fund to help these families.

Fabian Salvioli called for equal legal treatment of cases where victims of war sexual torture seek compensation in court proceedings, and called for the immediate, without delay, victims whose lawsuits were rejected to be exempted from paying costs.

He also called for equalization of aid to victims and said that the goal of the reparations program in Bosnia and Herzegovina must not be questioned.

He called on the institutions in Bosnia and Herzegovina and the international community to take appropriate action to meet these goals.

This human rights expert visited Bosnia and Herzegovina from 3 to 10 December as a post-conflict society in order to assess the measures in the field of truth, justice, reparations, remembrance, and guarantees of non-repetition, adopted by BiH government institutions to address difficult violations of human rights and humanitarian law, committed during the war.

On the ground, he spoke with victims, representatives of the BiH authorities, the judiciary, security, and human rights institutions, academia and the international community, the media, and civil society.