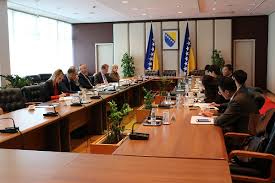 Mirko Sarovic, the minister of foreign trade and economic relations, met today with the delegation of the Sino-CEE fund Holding Company led by the president Jiang Jianqing, with whom he discussed cooperation in the implementation of key energy, infrastructure and other important projects for which major Chinese companies are interested.

“There is a great commitment and the chance to work together and build through this fund, which is in the interest of our countries and our businessmen. There are several key projects with Chinese partners, especially in the field of energy and infrastructure, in the planning and realization stages, but space is increasingly opening up for investments in business, agriculture, trade and other sectors,” Sarovic said.

President Jiang Jianqing expressed his satisfaction and gratitude to the Sarovic and BiH partners for their “willingness and honest and responsible engagement on projects”, among which are the planned projects of HE Dabar in Trebinje, TE Kamengrad in Sanski Most and TE Gacko, as well as projects that are already in the phase of finalization such as TPP Banovići and TE Tuzla-Blok 7 project, one of the largest post-war projects in BiH.

The Chinese side also expressed interest in projects in the field of renewable energy sources such as solar energy and wind energy for which significant unused potential exists in BiH and where the next forms of cooperation were agreed.