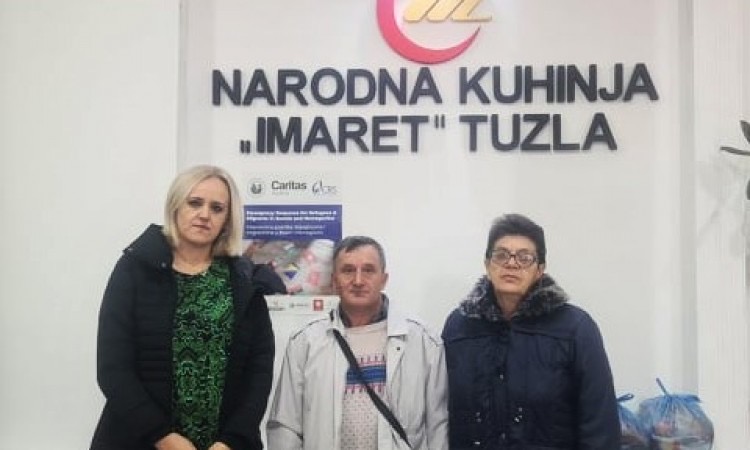 Salih Husarkic, a long-term employee of the “Banovici” Brown Coal Mine, won the annual plaque in his company for his contribution to the work. This modest and hard-working citizen of Banovici showed great humanity and decided to donate the money from the prize in the amount of 450 BAM to the National Kitchen “Imaret” in Tuzla.

”He did not stop there, so he spent part of the end-of-year bonusintended for a holiday for the most necessary groceries in the Soup Kitchen, which he and his wife Rukija personally handed over in the former Expres Restaurant in Tuzla, where meals are prepared for socially disadvantaged citizens in this area, ” as announced from the Regional Board of “Merhamet” Tuzla.

”Instead of organizing a meeting or celebration with this money, which is usually done, I felt the need to help the most vulnerable among us and I am extremely pleased to have been given the opportunity to do so, ” said Husarkic.

He is also known for his unusual hobby, in his free time he very successfully makes replicas of the most famous mosques in our country using match trees.

”We would like to thank Mr. Husarkic for his valuable donation and many individuals and companies for their significant response to our appeal for support to the Imaret Soup Kitchen.They have given us a great help to overcome the difficult situation with food shortages caused by rising food prices in the market. We also ask others who are able to follow these examples, ” explained Mensura Husanovic, director of the Regional Committee of “Merhamet” Tuzla.

”The Soup Kitchen “Imaret” in Tuzla, the largest in Bosnia and Herzegovina (BiH), currently feeds more than 2.400 users, and meals are divided into as many as 19 points, ” it was noted in the statement.