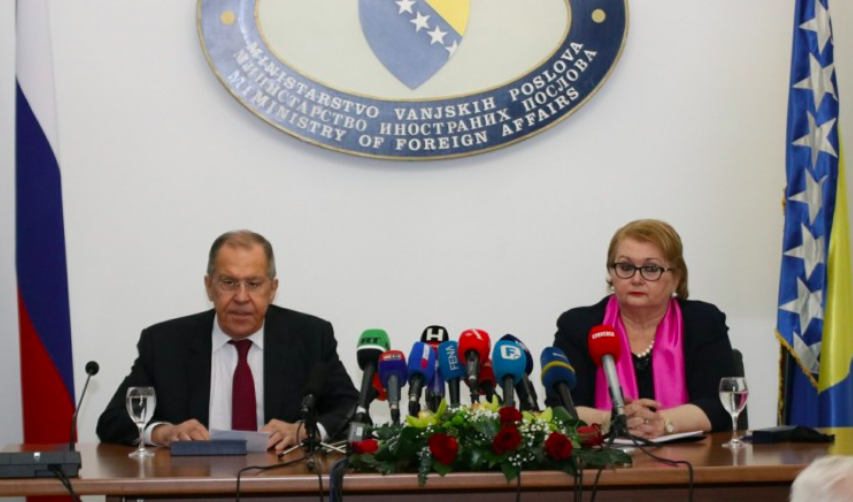 The Minister of Foreign Affairs of Bosnia and Herzegovina (BiH) and the Head of Diplomacy of the Russian Federation Sergey Lavrov met yesterday in Sochi, where they discussed relations between the two countries, but also the current political situation in BiH.

At the press conference, the Minister of Foreign Affairs of Russia emphasized that the conversation was sincere and friendly and that it was coming at the time of the 25th anniversary of diplomatic relations between the Russian Federation and BiH.

“We talked about 12 draft agreements between the two countries, the opening of the office of the Russian Embassy in Banja Luka. Economic and trade ties are very important. Russia is one of the leading trade partners of BiH. I am happy that more BiH citizens are interested in studying in Russian, the study of Russian culture and Russian history, and we will increase the number of tuition fees for BiH citizens who want to study in Russia by 50 percent next year,“ Lavrov mentioned in an introduction to the press conference.

Later, the Russian Foreign Minister commented on the situation in BiH and pointed out that Russia supports an independent BiHand its territorial integrity and sovereignty.

“We express our support for the Dayton Peace Agreement and the fundamental principles of independence, territorial integrity,and sovereignty of BiH, equality of the three constituent peoples and the two entities. The influence of external factors and foreign governance is unacceptable,” Lavrov told.

Lavrov reiterated that Russia is in favor of closing the Office of the High Representative in BiH (OHR).

On the other hand, the Minister of Foreign Affairs of BiH, Bisera Turkovic thanked Sergey Lavrov in the introductory part of the conference for the fact that in 1992 Russia recognized a sovereign and independent BiH.

“The Presidency of BiH has agreed to open an office of the Russian Embassy in Banja Luka. We also expect a decision to open cultural offices in BiH. We stated that cooperation between the two countries is at a satisfactory level, but needs to be improved. Russia is on the list of the largest investors in BiH and is an important energy partner for us. BiH market compared to Russia is small and therefore the deficit is higher. We will find a way to increase exports from BiH to Russia, which would certainly help the economy,” said Turkovic.

Also, she stressed that the possibility of exhibiting the original Charter of Kulin Ban next year at the National Museum in Sarajevo was discussed during the meeting.

When it comes to the status of the OHR, Turkovic emphasized that the OHR is included in the Dayton Agreement.

Finally, Turkovic thanked Lavrov for organizing the meeting and explained that only truth and justice can build deeper trust in BiH.

“I consider today’s talks a major contribution to improving relations between our two countries. We are grateful to Lavrov for his vision, understanding of the situation, and great knowledge. The Russian Federation is a happy country with such a foreign minister,” concluded yesterday BiH Foreign Minister, Bisera Turkovic.