After he was released a few days ago after serving two thirds of his sentence, war criminal Radoslav Brđanin is being treated in Banja Luka.

This was confirmed by the director of the University Clinical Center (UCC) of Banja Luka, Vlado Đajić.

“The patient’s life is threatened and placed in the Clinic of Intensive Medicine for non-surgical branches of the University Hospital of the Republika Srpska, where he is receiving adequate therapy, and his general health condition is deteriorating. The medical council consisting of an intensivist, a gastroenterologist, an abdominal surgeon, an oncologist, and a radiologist after the examination and a detailed evaluation of the health condition of Radoslav Brđanin found that the patient has clinical and laboratory indicators of a simultaneous progressive weakening of the function of several vital organs and organ systems (lungs, liver and kidneys)”, according to the press release of the UKC of the RS.

On several occasions, the president of the court, Carmel Agius, refused his requests for early release.

After the verdict of the Hague Tribunal, Brđanin served his sentence in Denmark, from where he was transferred to the custody of the Hague Mechanism for International Criminal Courts from prison in Denmark on September 14 last year.

The reason for his transfer was that Denmark informed the court in The Hague that according to all their laws the Brđanin had fulfilled the conditions to be released and that they no longer had the right to keep him in prison. Then they said that he could no longer serve his sentence in Denmark because that would violate his human rights.

He was supposed to remain in Scheveningen until the Hague Criminal Courts Mechanism made an agreement with another country to which he would be transferred to serve the remainder of his sentence or to be released.

After the war, Brđanin was the president of the People’s Party of RS until he was arrested in July 1999 and taken to The Hague on charges of being responsible for war crimes in Krajina. Why are BiH Fans prohibited from bringing in a Flag with Lilies?
Next Article 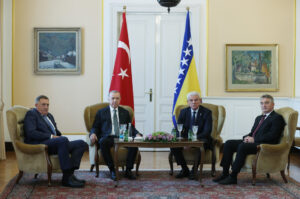