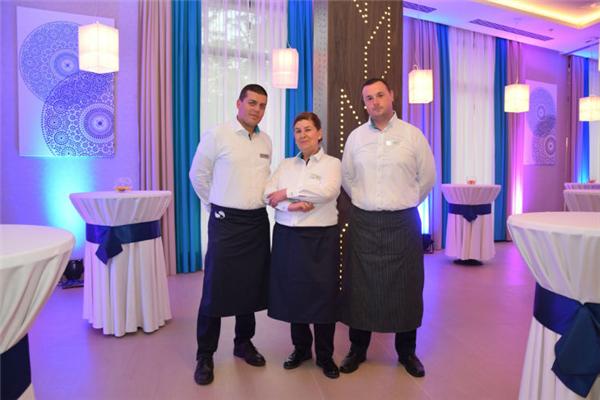 Another Marriott hotel was opened in Sarajevo and one of the major projects of the domestic manufacturers has been successfully completed.

Uniforms for the staff of Marriott hotel were done by successful B&H brand Bellissima, which managed to match the uniforms with the entire interior, and satisfy the desires and needs of the Hotel Marriott.

The team of designers and constructors who worked on the creation of uniforms made a special effort so that every detail is done flawlessly. The lines that were made on uniforms are inspired by the Bosnian traditional costumes and thus gives additional charm to the models. Accordingly, women’s jackets were made without lapels and a detail inspired by the Bosnian spirit was added to all the uniforms. The colors on the details of the hotel interior are the ice green and turquoise blue, so the details on the uniforms were made in turquoise as well.

Special attention was given to the selection of materials and uniforms for all the staff were made from the exclusive fabric in which the employees will feel comfortable. Jackets, pants and skirts were made of high-quality processed wool with fashion treating that gives a certain glow to the material.

B&H Popcorn won Vienna, now moving to the USA!
Next Article Jasmin Grebić arrived in Sarajevo: The Trip to Barcelona on a Bicycle was my greatest Wish
Leave a comment Leave a comment