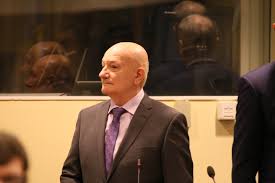 Milivoj Petkovic, who was sentenced to 20 years in prison in The Hague for war crimes in the so-called Herceg-Bosna wrote a letter to the President of the Hague Tribunal, Judge Carmel Agius.

You can see Petkovic’s letter below, written by hand from a prison in Belgium, where the native of Sibenik and former Chief of the Croatian Defense Council (HVO) General Staff was transferred to serve his prison sentence:

“Honorable Mr. Agius, my defenders, with my consent, have applied for my early release. In this context, I feel the need to address you and express my position on my verdict and sentence, especially since this is the first opportunity for me to do it personally.

I’m really not a person who expresses emotions easily, but that doesn’t mean I don’t have them or don’t experience them. My restraint in showing emotion is probably a consequence of my military education and upbringing because I have been a soldier almost my entire life. In any case, I assure you, Mr. President, that this does not mean my insensitivity or lack of empathy for others.

Your Honor, Mr. President, almost 30 years have passed since the war events in the Republic of Croatia and the Republic of Bosnia and Herzegovina (RBiH), I had participated in. Not a single day has passed since then without images of the war horrors returning to my memory. I know it will be like that for the rest of my life. I live with it and I deal with it as best I can.War is a human tragedy. Evil. In war, even good people can contribute to the commission of crimes by their deeds or omissions.

Today, eight years since the first-instance judgment and four years after the final judgment, I need to say to you, Mr President, and to all others, that I accept my judgement and personal responsibility for my acts or omissions that led to the crimes which I was convicted for.

I also accepted the punishment I serve. There is no justification, nor excuse, for the crimes committed. Because of that I feel sincere remorse and express, on this occasion as well, my deep condolences to all the victims of the Bosniaks ethnicity, and to their relatives and friends.

I feel a human need to say this, although I am aware that my regrets and expressions of condolence are a small consolation to all those who have lost their loved ones. Admitting the crimes committed, sincere remorse, and expression of condolences to the families of the victims is the only way to sincere reconciliation, preservation of peace, and coexistence among the peoples of BiH and the entire former Yugoslavia.

I hope this statement of mine will contribute to that goal at least a little bit. It is the most I can do in these circumstances. I believe that any conflict or misunderstanding between the peoples of BiH can and must be resolved exclusively through negotiations and agreements. By no means and never again by force or by war.

I say this as a soldier and that my belief of mine is not from yesterday. In this context and for this reason, I write to you, Mr. President. Honorable Judge Agius, I hope that you will not findthis letter of mine in any way as inappropriate or contrary to the interests of peace and coexistence among the peoples of BiH. Otherwise please disregard it, Klix.ba writes.