Official talks with other political parties will start on November 3 or 4, but the foundations have been laid. Our position is that the legitimate representatives of the three peoples primarily have the obligation to sit down and try to create the necessary parliamentary majorities that will be able to guarantee the implementation of certain programs. We have prepared an outline program for the next four years. That program will not be too broad, but it will contain all the elements that are needed, said the president of the Croat Democratic Union in Bosnia and Herzegovina (HDZ BiH), Dragan Čović, in an interview with FENA.

In preliminary discussions with other political party leaders, it was agreed, says Čović, that nothing should be done before the official announcement of the election results, which means November 2. The HDZ with other parties of the HNS is, he adds, an unavoidable factor, and the outcome on the other side is something that is expected to be resolved.

“It seems to me that at the FBiH level there will be two groups of parties that will have an approximately equal number of mandates in the House of Representatives. Then it remains to be seen which of them will have the majority in the Bosniak caucus in the House of Peoples. We will try to find partners with whom we can implement programs and establish government within one month after the official announcement of the election results. In any case, it would have to be this year,” Čović said.

He is optimistic and says that no matter how these negotiations end, he is convinced that “at least in the initial period, we will have a quick reaction that will show that there has been a change of government”.

“It would be logical to establish government vertically because it makes work easier. For its part, the HDZ will act in this way, and we hope that the partners will also succeed in ensuring this through numbers. Although it is clear that we will not be able to include all cantons in that plan because agreements on different coalitions in certain cantons are already visible on the Bosniak side of the political scene. Our basic desire is that with those with whom we establish power on one level, we also establish it on all other levels. I hope we will succeed in that,” says Čović.

In the previous talks with other political parties, there were no special conditions, while only the Democratic Front (DF) is unacceptable as a partner to the HDZ due to the “usurpation of the Croat seat in the BiH Presidency”.

“We will create a partnership without the DF, and how someone will work out the personnel structure within the second bloc, we cannot and do not want to interfere in that,” added Čović.

As for the state level, he says that whoever has three representatives in the caucuses in the House of Peoples will also have guaranteed legitimate representation, that is, the capacity to be part of the collegium and the parliamentary majority that can make decisions. That, says Čović, is an indicator of the direction in which the processes should go.

At the FBiH level, Čović sees a problem in the manner of filling the caucuses of Serbs, as well as the Other nations in the House of Peoples.

“Until yesterday, it was important how to hold the reign of the Croat caucus, and now, the goal is to do that with the Serb caucus and the caucus of Other nations. According to what I see, we will not be able to fill either of these two caucuses and now the enormous powers are left with the Central Electoral Commission, which I think is problematic. They will probably direct their decisions according to the policies that appointed them to that body,” Čović believes.

Regarding the possibility of creating a wider bloc of parties with their seats in Sarajevo, which would enter into negotiations on the formation of a government with the HDZ, Čović says that he would not mind that at all if it was for the benefit of BiH and its European path.

“However, as I see their relationship, it is completely unrealistic. I listened to most of my colleagues from that political structure and I don’t see the possibility of such a thing, but I wouldn’t mind, because that would mean a wider parliamentary majority that would enable us to work more easily and quickly. Necessity has forced us as Croats to all go together, but otherwise, it makes no sense, because pluralism must be given a chance, to know who is the government and who is the opposition,” says Čović.

Speaking about the program that the HDZ will insist on in the negotiations, Čović says that he has already informed the party leaders with whom he spoke about it and that their reactions were mostly positive, because “most of them want us to make a step forward so that we have another situation in which four years will go down the drain without achieving anything.

On the foreign policy front, the priority of all priorities is candidate status for the EU.

A part of it, he states, must also be a foreign policy program that will be primarily oriented toward Brussels.

“We expect that those who will be in power with us have the same goal, and that all other preferences, Eastern or any other, will be placed in the background.

“The best would be for the High Representative to cancel all previous decisions of his predecessors and to return to the original Dayton Peace Agreement. Until that moment, everything was functioning, and things started to go in a bad direction exactly when changes of the DPA began with small, gradual steps,” said Dragan Čović in an interview with FENA. 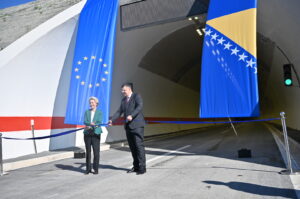