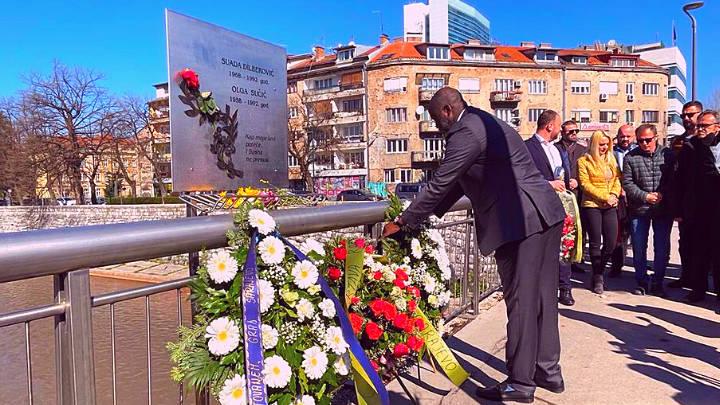 As part of his visit, Mr. Tambadou attended a number of events in Sarajevo to commemorate the 30th anniversary of the start of the Siege of Sarajevo, including an exhibition on “The Siege of Sarajevo” at the City Hall, a flower-laying ceremony at the Suada and Olga Bridge in Sarajevo and an international conference at the Sarajevo City Hall entitled: “30 Years Later: Sarajevo”.

Registrar Tambadou also met with a number of BiH government officials, including Minister of Foreign Affairs and Vice-Chairwoman of the Council of Ministers of BiH, Ms. Bisera Turković and Minister of Justice, Mr. Josip Grubeša. He also met with the President of the Court of BiH, Judge Ranko Debevec. The topics discussed during those meetings included matters relating to cooperation between Bosnia and Herzegovina and the Mechanism, as well as the provision of assistance by the Mechanism to the BiH judiciary, and the registration of judgments of the International Criminal Tribunal for the former Yugoslavia (ICTY) and the Mechanism at the domestic level.

The official visit also provided Registrar Tambadou with the opportunity to meet with members of the international community, including the High Representative for BiH, Mr. Christian Schmidt and the UNDP Resident Representative in BiH, Ms. Steliana Nadera. On 7 April 2022, together with Mechanism Prosecutor Serge Brammertz, the two Principals held a diplomatic briefing for the diplomatic corps in BiH where they provided an update on the Mechanism’s current activities. Registrar Tambadou further met with the representatives of victims associations in BiH, including the Mothers of the Enclaves of Srebrenica and Žepa; Victims and Witnesses of Genocide and the Women Victims of War.

The Registrar concluded his visit to BiH with a visit to the Information Centre on the ICTY at Sarajevo City Hall. This was his first visit to the region of the former Yugoslavia in his current capacity since assuming office as Mechanism Registrar in July 2020.