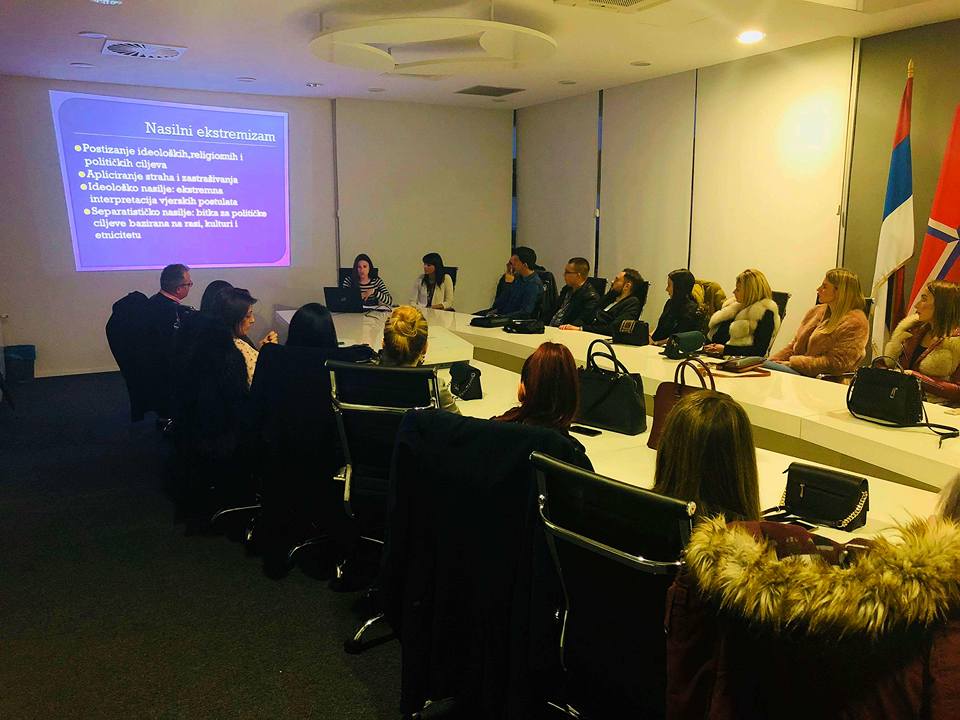 On Monday evening in East Sarajevo, a panel discussion on the topic “Women in violent Extremism” was organized by the Advanced Leadership in Politics Institute (ALPI) participants Hana Imsirovic and Jovana Amovic. ALPI is an intensive two-year program of International Republican Institute gathering 25 young politicians from 10 political parties and different local communities for instance from BH cities of Banja Luka, Sarajevo, Doboj, Brcko, Capljina, Prijedor and Bihac. It is a platform for young people to exchange ideas and opinions about various relevant and important topics.

Ms Imsirovic and Amovic decided to dedicate their time to explore aspects of security in relation to violent extremism and how the gender roles resonate in that context. However, the emphasis was not on topic only, but on bringing together young people from two entities and discussing the previously stated topic. They stated the importance of working on the cooperation of two ethnic groups, Bosniaks and Serbs, and that such events are a perfect opportunity.

“Unfortunately, it is common that some young people from Federation of Bosnia and Herzegovina never went to other entity and vice versa. With this panel discussion my colleague Jovana and I want to make these barriers less visible or, at least, to partially weaken them” said Imsirovic.

The focus of these two young ladies was to present a topic for which consensus about importance and relevance is easy to reach and in that way stimulate new friendships, connections and experiences.

Ms. Amovic presented how women in extremist organizations are portrayed by media. By analyzing media content she stated that contrary to the common public opinion women terrorists are neither exception nor interlopers in that domain.

“When we cannot understand women in roles that cultural norms and prejudices perceive as inherently male, there is a tendency to resort to stereotypical explanations. That is exactly how media refers to the problem of women in extremist groups. Most of the media coverage portrays female terrorists in the stereotypical manner, where an emphasis is put on their looks, family background, love relationship, etc. This type of reporting has strong effects on the perceptions and reactions of news receivers, and contributes to creation of societal and gender clichés”.

Ms. Amovic further continued by saying: “There is evidence that gender stereotypes present in society do affect tactical consideration and actions of terrorist organizations, so intelligence community, law enforcement, and other involved in the creation and implementation of anti- and counter-terrorism should be aware and understand the differences of stereotypical female terrorist and the reality of gender roles in terrorism. It is crucial for the whole society to understand the real female role in extremist organizations”.

Ms.Imsirovic talked about the role of women in violent extremism and she posed a precise question for the audience whether women in this context is a victim or a perpetrator. She embedded the presentation in general setting where security is often being related to men and their sphere of influence which derived from traditional roles in the family.

“Dichotomy (public-male) and (private-women) stimulates discourse of men holding monopoly on power because public equals power. Women are usually perceived as irrelevant actors since their participation in power sharing is reduced. Such stances get infiltrated into the literature of security studies which often perceive women as victims” she added.

Ms. Imsirovic further explained that a certain number of woman in violent-extremist organizations are victims and hold roles of wives and mothers dominantly, but there are women being protagonists and their participation in violent extremism rise rapidly. Such trend is often underestimated. Hana also gave examples of women who were involved in violent organizations throughout history and through various contexts: Ireland Republican Army (IRA) and Black Widows-Chechnya. Her presentation gave an insight from which one could conclude that the role of women in violent extremism is not reduced to fulfilling obligations of being wife and mother only or reduced to traditional (weaker) roles. Becoming part of extremist groups is not strictly imposed on women. Some of them join such organizations voluntarily from ideological reasons or to empower themselves and participate fully using all necessary means as their male counterparts.