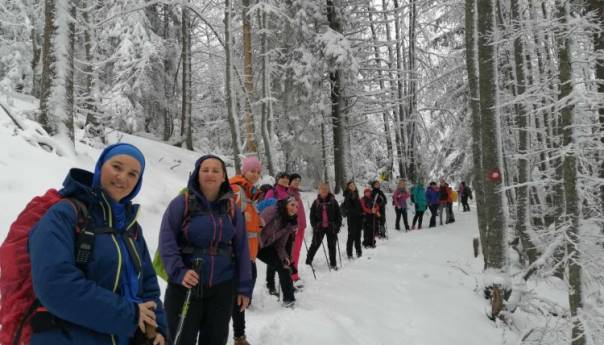 On the occasion of International Women’s Day, the Mountaineering Federation of Sarajevo Canton and the Station of Mountaineering Guides Sarajevo organized, for the seventh consecutive year, the climb of “100 Women on Trebevic”, Fena news agency reports.

Participants of the Eighth March hike to the highest peak of Trebevic, Sofa at 1,629 meters above sea level, hiked in the direction of: Ravne – Good Waters – Vaso Miskin Crni Mountain Lodge.

Cloudy weather and precipitations caused fewer participants to hike on Sunday than in previous years, which did not diminish the significance of this event marking International Women’s Day.

A lunch was organized for the 60 hikers in the mountain lodge on Trebevic.

The guides were women, members of the Sarajevo Mountaineering Station, and the main leader of the climb was Sabina Redzovic.

Mountaineering Association of Sarajevo Canton and Mountaineering Guide Station Sarajevo organized for the first time a march of “100 Women to Trebevic” in March 2014.

The new millennium has witnessed a significant change and attitudinal shift in both women’s and society’s thoughts about women’s equality and emancipation. Many from a younger generation feel that ‘all the battles have been won for women’ while many feminists from the 1970’s know only too well the longevity and ingrained complexity of patriarchy. With more women in the boardroom, greater equality in legislative rights, and an increased critical mass of women’s visibility as impressive role models in every aspect of life, one could think that women have gained true equality. The unfortunate fact is that women are still not paid equally to that of their male counterparts, women still are not present in equal numbers in business or politics, and globally women’s education, health and the violence against them is worse than that of men.

However, great improvements have been made. We do have female astronauts and prime ministers, school girls are welcomed into university, women can work and have a family, women have real choices. And so the tone and nature of IWD has, for the past few years, moved from being a reminder about the negatives to a celebration of the positives.