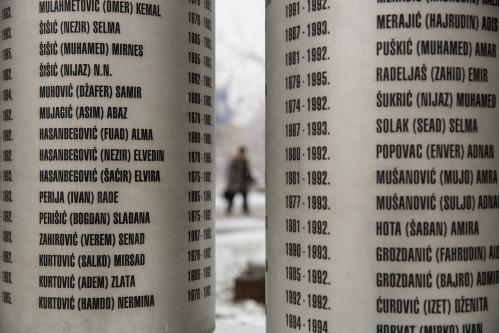 The Institute for Research of Crimes Against Humanity and International Law of the University of Sarajevo spoke on the occasion of the investigation of crimes against children under siege of Sarajevo 1992-1995.

In a 1996 report, the Health Care Institute of Bosnia and Herzegovina (BiH) provided lists with individual identities that 1.601 children had been killed and 14.946 children wounded under the siege of Sarajevo.

Professor Dr. Salahudin Dizdarevic, Head of the Clinic for Pediatric Surgery of Sarajevo University Clinical Center (KCUS), in a research paper entitled “Pediatric Surgery in the Defense War of the Republic of BiH”, presented at the Congress of Surgeons of BiH with international participation in May 1996 in Sarajevo, said that in Sarajevo from April 5th, 1992 to June 30th, 1995, 1.585 children were killed and 14.888 wounded. Out of the total number of wounded, 3.378 children were seriously injured, among which 355 are children with permanent disabilities. The injured children were treated at six hospitals in Sarajevo.

In 2006, the Institute for Research of Crimes Against Humanity and International Law of the University of Sarajevo launched the project “Crimes against the Children of Sarajevo under Siege 1992-1995” in coordination with the Association of Parents of Murdered Children.

As a result of many years of work, a scientific study entitled “Crimes against the Children of Sarajevo under Siege” was published in 2010. In this research, the Institute applied the scientific methodology and conditions that were necessary in order to record the victim in the book.

In addition to 524 obituaries on children, the book is a testimony to the grave forms and methods of crimes against children in Sarajevo, crime scenes, and mass and individual murders of children, with special emphasis on the strategy of killing children, with the systematic killing and non-prosecution of perpetrators of crimes committed and the consequences that the crimes have left on the entire Bosnian society.

After the book was made, the institute forwarded all the names in this study at the request of the City of Sarajevo, and they were inscribed in the Veliki Park (Great Park) in front of the monument to the children killed in Sarajevo in 1992-1995 in the shape of nine cylinders.

”In the further work, a big problem is the fact that a certain number of parents that the Institute has in the records is not available (going abroad, separated families, deceased members, deaths of complete families, etc.), as well as the fact that a number of parents did not report the murdered child for personal reasons. These reasons make it difficult to complete the data according to scientific criteria. Despite that, the Institute, in addition to the records of 524 killed children, working continuously, has records for another 291 killed children. Data on these children were obtained on the basis of comparing a dozen primary sources, but what is characteristic of them is that detailed documentation of the closest relatives was not obtained and no interview was conducted with the parents. This information contains the name and surname of the murdered person, the name of the victim’s father, sex, date of birth, place of birth, citizenship, place of residence, date of death, date of burial, place of burial, and other sources of information. Also, there are other records with a larger number of data on murdered children, but the Institute does not have a sufficient number of sources of information that could confirm the manner of suffering. Considering that according to the Law on Personal Data Protection, these are sensitive documents, the Institute submits these documents exclusively by order to the Prosecutor’s Office for the purposes of processing war crimes,” said the institute.

Apart from the number of crimes committed, the gravity and consequences that the siege of Sarajevo left on children and parents, as well as on the entire Bosnian society, are completely ignored. Based on relevant documentation, and professional and scientific research, it was determined, among other things, that in addition to mass and individual killings, injuries of childrenwas a daily occurrence in Sarajevo during the siege.

Cudic: He brought BiH to the brink of Conflict
Next Article