The multi-member committee appointed by the Holy See under the leadership of Cardinal Camillo Ruini has completed its work and submitted its report to the Congregation for the Doctrine of the Faith.

The Provincial of the Franciscan Province of Herzegovina, Fr. Jozo Grbes, expressed his expectation that the world-famous pilgrimage center of Medjugorje will soon be declared a sanctuary.

“I hope that Medjugorje will be declared a sanctuary. I actually believe that,” said Fr. Grbes. At the same time, he did not evaluate whether the Church would recognize the supernatural apparitions of the Blessed Virgin Mary.

He added that declaring Medjugorje a sanctuary “is only a matter of time”.

According to him, Medjugorje is “the most authentic Christian place in the world according to confessions”.

The source of the Medjugorje phenomenon is linked to the public testimonies of six witnesses to whom the Blessed Virgin Mary allegedly appeared in this place in 1981.

Since then, Medjugorje has been considered one of the holiestChristian places in this part of Europe, and tens of thousands of believers visit it every year, Klix.ba reports. 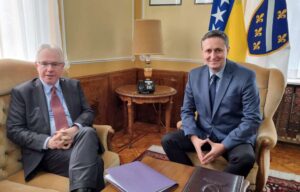