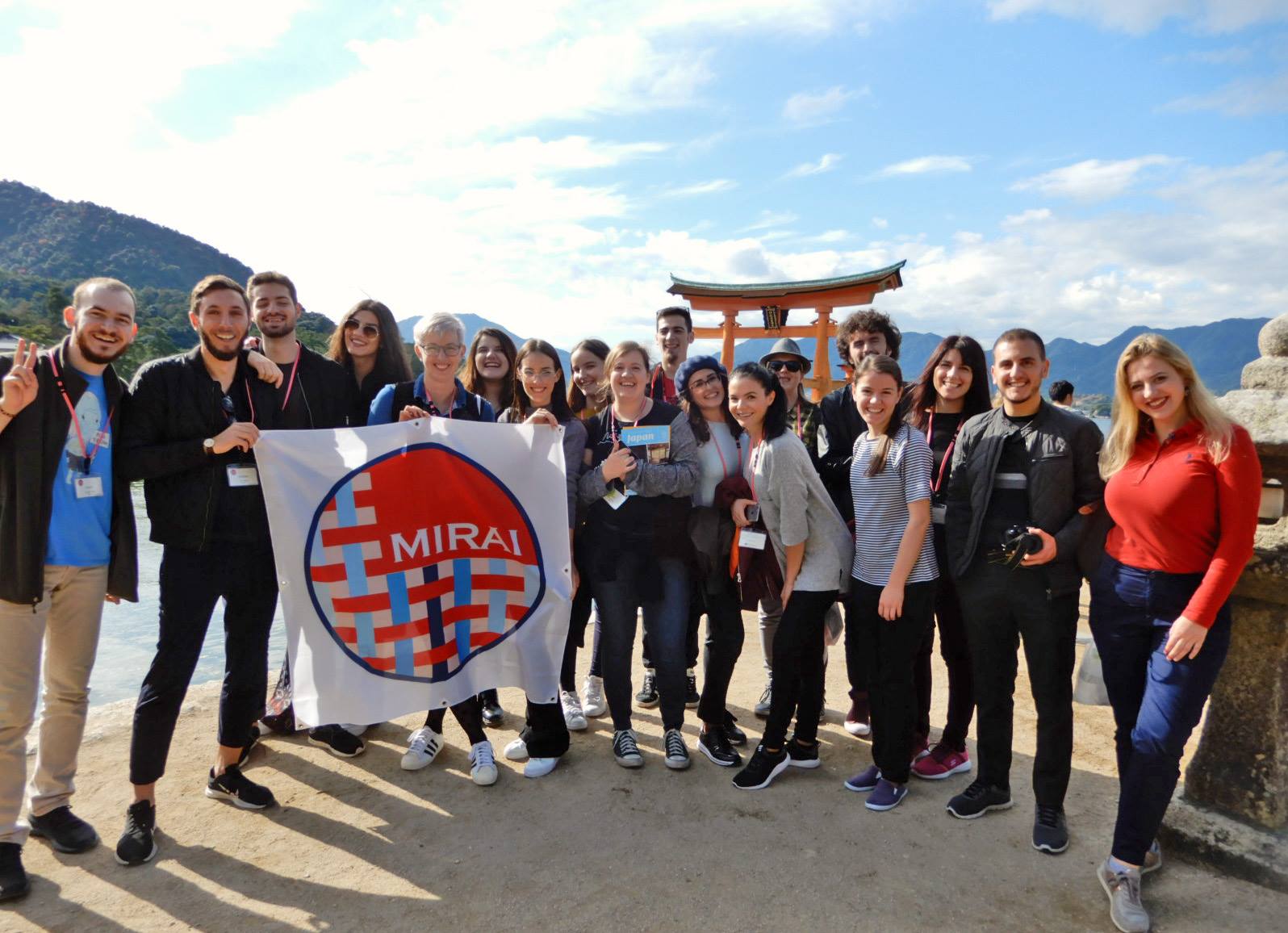 A group of 17 young people from Albania, Macedonia, Serbia, Kosovo, Montenegro and Bosnia and Herzegovina had the opportunity in November 2018 to visit Tokyo, Hiroshima and Kyoto through ten-days visit entitled “Western Balkans Meet Japan: A Bridge into the Future ” within the MIRAI program. The MIRAI program was created within the framework of the cooperation between RYCO- Regional Youth Cooperation Office and the Ministry of Foreign Affairs of Japan – MOFA. Participant from Bosnia and Herzegovina Tamara Cvetković decided to convey her impressions from a very emotional visit to Hiroshima.

Trust me, reader, I never in my life thought I was going to sit in the Hiroshima Memorial Park. In Japan, which is six time zones away from my country.

On the wall in front of me, black and white images are repeated over and over. And, trust me, reader; those can remind you of everything, but not life! Darkness. I have the feeling that I can hear the moans calling me. When I think for a while, in front of me, a black and white screen takes on a film of pain and horror. I’m looking at bloody women and children at one point. At other time, I hear the cries and the cries and how the woman in front of me tries to get in touch with her mother. But all of this is slowly disappearing somewhere because I feel that my face is tearing down.

I am in Memorial Hiroshima Park and I am listening to the story of survivor of the atomic bomb attack in Hiroshima on August 6, 1945. Just 73 years ago, one of the greatest tragedies of the 20th century occurred. The city of Hiroshima, together with all its citizens, and together with the whole infrastructure was razed with the ground.

Consequences: 140 000 dead. The exact number of those who have suffered from a variety of malignancies and other diseases is unknown.

Let’s get back to the room where I was, along with 17 other young people from the Balkans, who were listening to the same story. No one breathes. No one moves. We picked up every word that echoed the room.  Tragedy. Pictures of children who had nightmares. Images full of fire and distorted shapes of human bodies. You know, that was 73 years ago. Precisely 73 years ago. Where the world’s most powerful people played with the lives of ordinary people! Did they have the right to do that?

When question aroused from one of the participants in the MIRAI program, whether the Americans should be prosecuted for the crime they did, a professor who was telling the story of survival, shrugged and said quietly, “But we were all guilty!” The sentence reached me deeply. And at the same time it cooled me down and encouraged me. For a number of reasons and questions that were in my head: Were the victims guilty? Their relatives? Victims do not know they have become victims! But, they also have the dignity! He used the pronoun WE, thinking of the Japanese people. Collective consciousness chose peace and love, against hate and revenge!

My peace-making court does not give me peace! Because, perhaps, it is my mistake to try to put this historic event that has changed the course of one nation’s life, into the corners of the country that I am coming from. Maybe my attitude is wrong! Because, what would happen if all sides recognize offenders, if they condemn war criminals, if they grant fundamental human rights to all victims in Bosnia and Herzegovina, if we give respect to each other, if we do not blindly believe the news that appears in 7:3o pm in all three public TV services, if we observe everything with a small amount of scepticism. But can we do that?

You know, today Hiroshima has about one million inhabitants. It was built entirely. Hiroshima Memorial Park testifies to the terrible period, with a series of exhibitions, 3D depictions of atomic bombs, testimonies of survivors, a large number of visitors from all over the world. The freaked, frustrated, sad faces of people walking down the stairs at the Park of the Memorial Complex. Some of them failed to hide the tears. Because, how could they! in that occasion, I returned to the nineties. I think that’s my code automatically set. It is a trigger … Or maybe that’s just human. Being emphatic. It’s something that makes you to identify yourself with circumstances that you are in.

I was always amazed by the people who could shut it off, not to cry, not to sob. I’m again the opposite one of that. Maybe one day I will become like that. It may be easier.

I am walking in parallel with the pictures from ’45. And I stop behind a girl and her dad. He holds her by the hand, slightly inclined to her. I get back halfway, just to remember that picture. And then I notice. The two are in front of a similar photograph. The black and white photograph in front of them has an identical scene. The girl holds a boy’s hand, dressed in traditional Japanese costume – kimono. Sister and brother. At the bottom right corner, they say they have not survived the atomic bomb. I looked back at the girl. She looked at her father, and than she looked back at the picture. Her father whispered something to her, pacing her hair, and then they went off. I still think these were the words of hope…

* The article was developed as a personal emotion of a program participant.

Tamara Cvetković is a peace activist from Bosnia and Herzegovina. She was nominated for the  Prize for Peace Building 2017. She likes to travel, write and learn. He believes that 1% of people can change the world and she wants to be part of that change! She is implementing activities with young people and women in rural communities because she knows that there are young people and women whose voices needs to be heard!