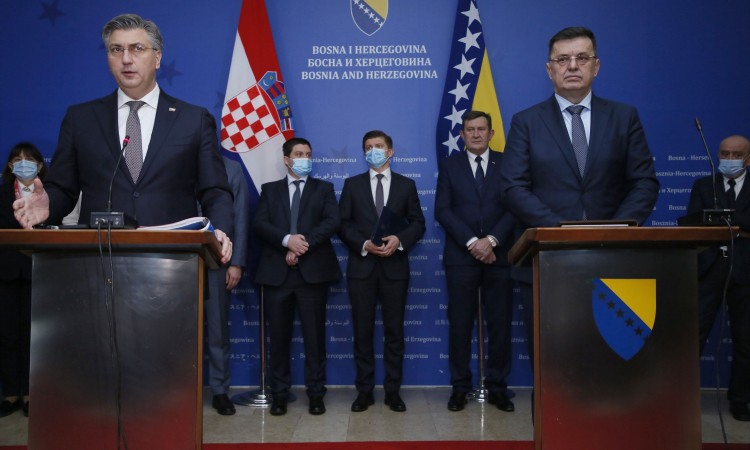 A joint session of the Council of Ministers of Bosnia and Herzegovina and the Government of the Republic of Croatia should be held in the first quarter of next year, as well as a joint economic forum of Croatian and BiH business owners in order to define the directions of further cooperation.

At the press conference after the meeting, they reiterated the views that the two countries have good bilateral relations in the political and economic sense, and it was announced that Croatia will continue to support the integration processes of BiH.

Croatia is one of the three most important foreign trade partners, and the decline in trade in 2020 has already recovered in the first 10 months of this year, and it should be at a level of more than two billion euros.

The interlocutors reminded of the recent opening of the Svilaj bridge on the Sava River, as well as the fact that the bridge in Gradiška, which also connects the two countries, should be completed soon, with a construction of a completely new border crossing to relocate it from the city.

Tegeltija and Plenković emphasized the importance of the completion of Corridor V-c and announced that Croatia is doing everything in its power to provide alternative gas supplies from the south, since the pipeline is located just 60 kilometers from BiH. In BiH, the documentation for the design of the pipeline is being prepared.

The interlocutors stated that the intention is to create a so-called green corridor with the European Union, which would ensure that BiH becomes the first country in the Western Balkans to be connected to the EU’s green corridor via Croatia.

Illegal migration was also discussed, and it was said that additional work should be done to ensure better cooperation between security agencies, especially between the police administrations of the two countries, and it was reiterated that Croatia will not put a wire on the border with BiH.

“We have some open issues that have been ongoing for a long time. Some of them are the result of the past or the succession, such as the issue of the property of BiH citizens and companies in Croatia and the arbitration procedure in the case of the Gacko Thermal Power Plant, but they do not endanger mutual relations,” Tegeltija believes.

However, there is the issue of the Border Agreement, which has not yet been ratified in any parliament, as well as the very current issue of building a nuclear and radioactive waste disposal site in Trgovska Gora near the border with BiH, and Tegeltija called on Croatia to find another location for the facility.

“This issue has caused fear among citizens in the Una River Valley. We have reached agreements that BiH will participate in the expert group for the construction of that facility, but finding another location would be the best solution because there is too much tension. That would be better rather than creating mutual distrust,” Tegeltija underlined.

It was reiterated that the two countries showed how to cooperate as neighbors when it came to responding to the coronavirus pandemic.

Plenković reiterated that “Croatia supports the provisions of the Dayton Peace Agreement, the integrity and sovereignty of BiH based on the two entities, the three constituent peoples and others that live in BiH”, and stressed their interest in “the equality of Croats as the smallest people in number to be legitimately represented in all BiH institutions.”