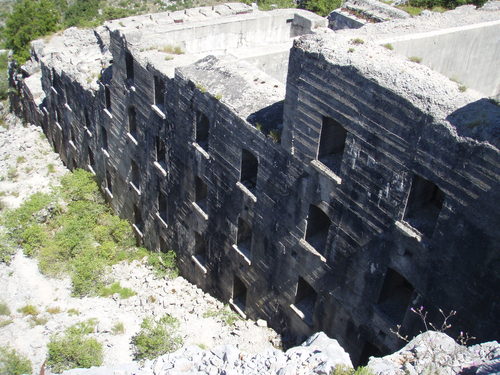 [wzslider autoplay=”true”]The following text, based on the research by experts from Austria and Trebinje, will finally reveal the myths and enigmas of the most significant fortification of a powerful monarchy.

The fortress was built in the period from 1910 until 1916 and the construction cost around 60 million EUR.

People of Trebinje like to talk how there are 365 rooms in their town, on the hill from which the entrance to the Bay of Kotor was being controlled in the early 20th century, but that is not a proven truth, revealed Dubravko Kurtović, President of the Speleological Society Zelena brda, who has been working for years on the revelation of urban myths related to this fortress.

“Strač does not have 365 rooms, that is an old urban myth. It has between 60 and 65 rooms, including sleeping quarters. There are no hidden rooms. There are several corridors towards the machine-gun turret, which cannot be seen from the surface, but only from the entrance of the fortress,” said Kurtović, noting that construction of Strač was never entirely completed, because Austro-Hungarian monarchy started experiencing a shortage of money in 1916, and the Montenegro under the rule of the King Nikola capitulated.

When the construction of Strač began in 1910, four turrets were supposed to be built, but only two were actually constructed. They weight around 55 tons, and majority of residents of Trebinje do not know how the builders at the time managed to build the turrets into Strač. According to Kurtović, the turrets were loaded onto an artillery tractor which was produced by the Austrian Daimler, where the chief constructor was Ferdinant Porsche, which is why this vehicle is called “the Porsche tractor”.

The turrets are 30 centimeters thick, while the thickness of turrets on the fortress Dvrsnik in Montenegro was 25 centimeters. That is a clear indicator that Strač had larger, heavier and more modern turrets produced by Škoda.

“According to the production numbers, those are 43rd and 44th turret. They have a number on the inside and it is written TR.S, which means Trebinje Strač. Those are labels engraved during the casting. Around fifty turrets of this type were casted and these on Strač are among the last ones,” Kurtović explained, noting that the turrets are preserved only in this fortification in the entire Europe.

The entire complex of Strač is interesting to all those who visit Trebinje at least once. Myths and legends have turned this fortification into an urban legend, but a great part of that story is grounded on imagination and the desire of those who are telling it to praise their city and the place where they come from. Not even the famous secret wells which could hold hundreds of cubic meters of water exist on Strač, but only several reservoirs.

Strač, which belongs to a newer type of construction in the Austro-Hungarian empire, contained around ten to fifteen cubic meters of water which was not rainwater, but the water pumped from the outside. The fortification was supplied with electrical energy with the help of a diesel aggregate with the strength of 50 to 70 kilowatts, specially ordered for this fortress.

“It is possible, however, that there was another aggregate on Strač, an external one which was used for its construction. Since it was used in the construction stage, and Strač was never completely constructed, there are indications that it was later used to light Trebinje during the 1920s and 1930s,” Kurtović stated.

Although a large number of known “facts” have not been tied with truth so far, that does not diminish the importance of Strač and its construction, as well as the importance of hardworking builders who spent years working on its construction. Preparations began immediately after the annexation of BiH in 1908, and official beginning of works was two years after. Construction was halted for a year during the Balkan Wars, and from mid-1913 the construction went unhindered until the summer of 1916.

Strač was designed on the basis of similar fortifications in Italy and it was supposed to protect this part of the empire from cannons with 240 mm caliber, which the Montenegrins got from the French and the Russians.

For that age, the fortification was built with contemporary concrete matter, not with stone as other surrounding fortresses. Roof construction was made of two rows of traverse profiles and cross profiles, covered with three meters and ten centimeters of special kinds of concrete.

“Two M-9 turrets from 100mm howitzers weighing 25 tons and two observation turrets were built into Strač and served for observations and guiding of artillery and, in case of need, as machine-gun lair,” Kurtović said.

The path that now leads to Strač was made by the Austrians, but there are also serious indications that a cable car was built from the director of Čičevo, used for transportation of cement and other construction materials. The fortress also included a mortuary with eight tin coffins in which bodies of the killed fighters were placed and then buries outside of the fortress, which can be seen today as well.