After the introduction of COVID-19-related restrictions by most EU Member States and partner countries in mid-March, movement throughout the Western Balkan and Eastern Partnership region decreased considerably. Most of the restrictive measures in the partner countries have subsequently been lifted. On 11 June 2020 the Commission adopted a Communication assessing the application of the temporary restriction of non-essential travel to the EU.

With regards to the countries neighbouring the EU, the Commission expressed a readiness to associate the region of the Western Balkans closely with the implementation of its Joint European Roadmap towards lifting COVID-19 containment measures. As a follow up the Council adopted on 30 June 2020 a recommendation on the progressive lifting of the travel restriction on non-essential inbound travel, including the first list of 15 countries (including Georgia, Montenegro and Serbia). The Recommendation is a first step towards the lifting of the restriction and it follows the gradual approach proposed by the Commission.

As regards cooperation on readmission, there has been a decrease in the return rate. The return rate in 2019 decreased to 40% (compared to 54% in 2018), with 1,495 nationals from Bosnia and Herzegovina effectively returned. However, since EU Member States report good cooperation of own and third-country nationals, this decrease may be due to the processing of large volumes of decisions, a backlog in consecutive years and possibly secondary movements.

The country has made significant efforts in border control and raising public awareness through targeted information campaigns on negative effects of the misuse of the visa-free regime evidenced by the decreasing numbers of unfounded asylum applicants from Bosnia and Herzegovina in the Schengen+ area.

The European Border and Coast Guard (Frontex) Status Agreement with the EU was initialled in January 2019 and its ratification remains pending. Following the entry into force of the new European Border Coast Guard Regulation, the Commission is working with Bosnia and Herzegovina in view of the ratification and entry into force of the Status Agreement.

Bosnia and Herzegovina continued to address irregular migration challenges including the flow of third-country nationals through the country towards the Schengen+ area. Following the increased influx of refugees and migrants in 2018 and in 2019, the authorities have redeployed available border guards. However, border and migration management, including in terms of reception capacities and coordination among institutions across the various levels of government require improvement.

The Coordination Body within the Ministry of Security, responsible for monitoring migratory trends, and acting as operational headquarters in case of crises is not functioning effectively, in particular regarding the allocation of suitable premises for reception centres and relocation of asylum seekers and migrants to available accommodation. Serious obstacles remain to an effective access to asylum procedures due to very limited human resources and operational capacity.

As a consequence of the COVID-19 crisis, Bosnia and Herzegovina declared the state of natural or other disasters on 18 March, restricting domestic and international movement of persons. The Republika Srpska entity declared a state of emergency from 28 March to 20 May. As of 30 March all commercial flights were cancelled until 1 June, when the flights resumed. 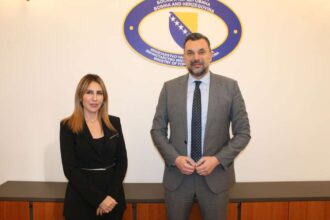