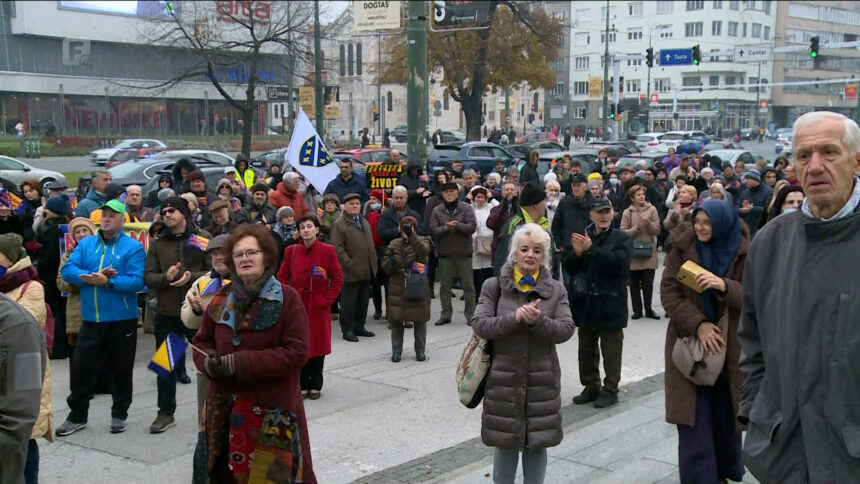 Under the motto “We will not give away the state”, the BiH Citizens’ Initiative held a protest in front of the state Parliament building. Several hundred gathered citizens criticized domestic, European, and American officials.

The organizers state that Bosnia and Herzegovina is faced with a historical dilemma of where to go next: should we go East or West or remain our own. Once again, they made their demands clear.

Among other things, they demand the punishment of genocide denial, the acceleration of the NATO and EU path, and the prevention of ethnic divisions.

“We do not give the country!” – it was clear from the organizers and gathered citizens that they did not hide their dissatisfaction with the work of local and foreign officials. A volley of criticism was directed at the address of High Representative Christian Schmidt.

They claim that although they have been asking for an invitation to a meeting with the OHR for months, they have never received one. They are not surprised, because, as they say, they have long since lost trust in the politics of the international community.

“Here, the state is at stake and a relationship of the high representative Christian Schmidt. They brought about this state and they produced this situation. They allowed Belgrade and Zagreb to act as bigger hosts in our country than Sarajevo,” said Mujo Aganović, president of the Association of RVI Paraplegics of the Federation of Bosnia and Herzegovina.

“If we do not stop the announced division of state property into entities, it would lead to the collapse of the state. Everything they do to complicate things in the Federation, they don’t apply in the Republika Srpska,” said Suad Đozić, a member of the Restart BiH Informal Group.

And if the judgment in the case of Azra Zornić, the appellant before the European Court of Human Rights, were implemented and applied, he claims that the parties that survive on ethno-nationalism would disappear. But, as he emphasizes, double standards towards EU countries and non-member countries are slowing down the process, which, instead of being purely legal, has become a political issue.

“The hypocritical right-wing Europe applies double standards – some apply within Europe, and completely different standards are applied to non-member countries,” Zornić pointed out.

One has to fight for one’s country, are the opinions of the citizens who went to the protests. Dissatisfied with the small number of people gathered, they made a clear statement: Crossing the border and leaving Bosnia and Herzegovina is not a solution!

None of the rulers addressed the citizens this time either. Because it’s a non-working day. In the building of the Parliament of Bosnia and Herzegovina yesterday, there were no people who would listen to their demands and hear the opinion of those who provided them with these functions. Citizens and organizers warn: These protests are just a prelude to a new mass gathering, if their demands are not met. Although they do not have high hopes, they say – they were clear, the government is on the move.

Cleaning Campaign held in the Area of Bunski Canal
Next Article