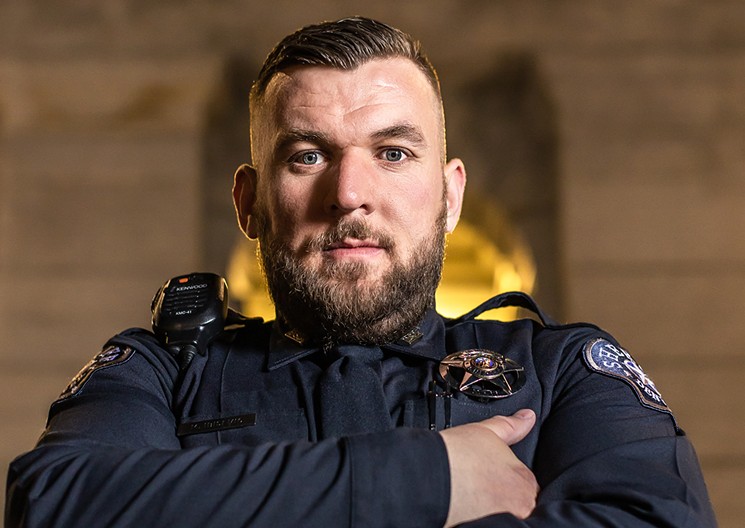 Denver Deputy Sheriff Melis Ibisevic was busing tables at the Chili’s on the 16th Street Mall for a Special Olympics charity event this summer when someone ran into the restaurant and said that a man had just jumped off a nearby roof.

Ibisevic ran outside. The man appeared to be dead, but he and his partner started applying tourniquets, and he began administering CPR. They worked on the man for over ten minutes before other first responders arrived.

“The guy didn’t make it, even though we tried our best and gave it all we had to attempt to save this man,” Ibisevic remembers.

His efforts did not go unnoticed. On February 21, the 29-year-old will receive a Sheriff Commendation Award at an annual department awards ceremony.

But it’s not just his first-responder instincts that make Ibisevic stand out in the sheriff’s department.

He came to this country as a refugee; when he was a young boy, he lived through war and genocide in his home country of Bosnia. Unlike many of his family members, including his police officer father, Junuz, he survived the violence and eventually came to Colorado.

And it was here that he decided to follow in his father’s footsteps.

Melis Ibisevic was born in September 1990 in a small village on the outskirts of the Bosnian town of Srebrenica, just as the Balkans were splitting apart. Famous as an intersection point for different religions and cultures, the Balkans were losing the political unity that the region had enjoyed for decades. And as political unity disappeared, ethno-nationalist politicians gained power. These leaders were quick to turn neighbors into enemies.

Dutch Smith, one of the high school’s resource officers who’s a detective with the Lakewood Police Department, helped propel Melis’s dreams of a career in law enforcement.

“I really latched onto him at the school,” Smith says. “He just always seemed very interested in how this whole thing works. I went through the full gamut of the ups and downs of law enforcement. The rigors of the job, the public perception of what you do. And he always kept going at it and wanted to be more involved.”

Smith introduced him to the Lakewood Police Explorer Program, which gives 14- to 21-year-olds an immersion in law enforcement. Participants learn about community policing and investigative techniques, and even get to help out with events in the community. Explorers also participate in competitions with Explorer units from other states.

Melis got into the program at sixteen. As part of his training, he worked at Colorado Mills, helping parents track down lost children.

“It helps them become a better police officer. They perform much better in the academy,” says Sonja Gist, a Lakewood police detective who has been the head of the city’s Explorer program for seven years.

But Melis had to wait until he was at least 21 to apply for a law enforcement job. So after graduating from Lakewood High School, he studied criminal justice at Red Rocks Community College and worked a variety of jobs. At one point, he was a guard for an armored bank truck. At another time, he served as a volunteer firefighter in Edgewater. But he kept an eye on his ultimate goal: “Law enforcement has always been a dream.”

When he was 24, Melis decided he was ready to apply for a job in law enforcement. That happened to be when the Denver Sheriff Department was recruiting for its upcoming academy, a “mega class” of deputies that was part of then-Sheriff Patrick Firman’s efforts to get new blood into a department that had been plagued by embarrassing and costly in-custody deaths and use-of-force incidents.

Ibisevic was accepted, and graduated from the academy in mid-2016, when he was 25. He’s been working in the jail division ever since, Westword reports.