The Partisan Memorial Cemetery in Mostar was shortlisted among the 11 most endangered cultural heritage sites in Europe.

On the occasion of the 10th anniversary of the 7 Most Endangered Programme in 2023, Europa Nostra – the European Voice of Civil Society Committed to Cultural and Natural Heritage – and the European Investment Bank Institute have just announced the 11 most threatened heritage sites in Europe shortlisted for this year’s edition of the program, Europa Nostra announced.

The selection of the shortlisted sites was made based on the outstanding heritage significance and cultural value of each of the sites as well as based on the serious danger that they are facing today, it is said in the statement.

“The level of engagement of local communities and the commitment of public and private stakeholders to saving these sites were considered as crucial added values. Another selection criterion was the potential of these sites to act as a catalyst for sustainable development and as a tool for promoting peace and dialogue within their localities and wider regions,” Europa Nostra stated.

Nominations for the 7 Most Endangered Programme 2023 were submitted by member organizations, associate organizations, or individual members of Europa Nostra from all over Europe as well as by members of the European Heritage Alliance.

The Partisan Memorial Cemetery was nominated by IDEAA Mostar for the 7 Most Endangered Program for 2023 with the support of the Mayor of Mostar, DESSA Gallery and Europa Nostra Serbia.

“The nominator advocates for adequate legal protection of the Partisan Memorial Cemetery following its designation as a Monument of National Importance back in January 2006, for the European and international recognition of its outstanding historical and artistic values, as well as for the development of a sustainable rehabilitation, maintenance and management plan for this exceptional memorial site and the allocation of necessary funds – from local, national and European sources – for the quality implementation of such a comprehensive plan,” the press release explained.

The Advisory Panel of the 7 Most Endangered Programme commented that the original design of the Partisan Memorial Cemetery in Mostar deliberately avoids the use of political or religious symbolism but makes use of cosmological symbols reminiscent of pre-Columbian remains and perhaps also referencing similar elements present in medieval sites in Bosnia and Herzegovina.

The Executive President of Europa Nostra, Prof. Dr. Hermann Parzinger, stated that this shortlist covers a wide variety of monuments and heritage sites which are facing different types of serious threats.

“The local communities and civil society organizations are deeply committed to preserving these remarkable examples of our shared heritage, but they need broader support. We, therefore, call on local, regional, national and European stakeholders, both public and private, to join forces with Europa Nostra and our network of members and partners to secure a viable future for these shortlisted sites,” concluded Parzinger.

Who are Bosnia’s Main Trade Partners?
Next Article 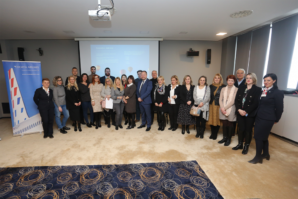