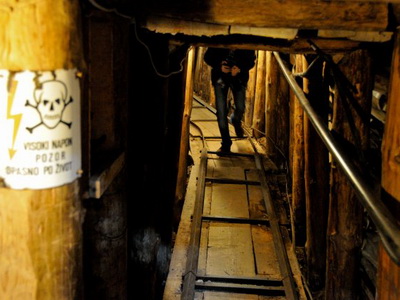 The opening ceremony of the 100 meters of the revitalized “Tunnel of Hope” tunnel pipe will be held today at 1 p.m., at the address Tuneli 1 in Sarajevo neighborhood Butmir, as part of the 30th anniversary of the siege of Sarajevo.

Namely, the participants will be addressed by the Chairman of the Assembly of Canton Sarajevo (CS) Elvedin Okeric, the Minister of Veterans Affairs of CS Omer Osmanovic, and the Director of the CS Memorial Fund Ahmed Kulanic.

During the renovation of the airport runway in 1997, a concrete mantel was made that protected the tunnel pipe completely, and by the decision of the public institution CS Memorial Fund, it was decided to revitalize 100 meters of the tunnel and open it for visits, Klix.ba writes.

All elements of the pipe renovation were made according to 1993 designs. Replicas of wooden beams from which the original part of the tunnel was built, as well as rails used to transport carts, PTT cables and cables for high voltage electricity transmission, oil pipe, illumination, and other elements that were in the original tunnel were installed.

The opening of the 100-meter revitalization of the tunnel pipe will be symbolically held in the days when Sarajevo residents remember the beginning of the siege of the city that began 30 years ago. The Tunnel of Hope played a significant role in the defense of Sarajevo and the salvation of Bosnia and Herzegovina (BiH), and at the same time was one of the decisive factors in the survival of citizens surrounded by 65 kilometers of enemy hoops.

The tunnel was dug on July 30th, 1993, giving Sarajevo its only entrance and exit from the city. During almost two years of using the Tunnel, about 2 million passages were recorded, unhindered entry of ammunition, weapons, motor fuels, food, and medicine was enabled, which is why the Tunnel was called the Tunnel of Hope.

This project will bring a completely new experience to all those who have not yet visited the Tunnel of Hope, and for those who used the tunnel during the war destruction, it will surely bring back memories of those moments.