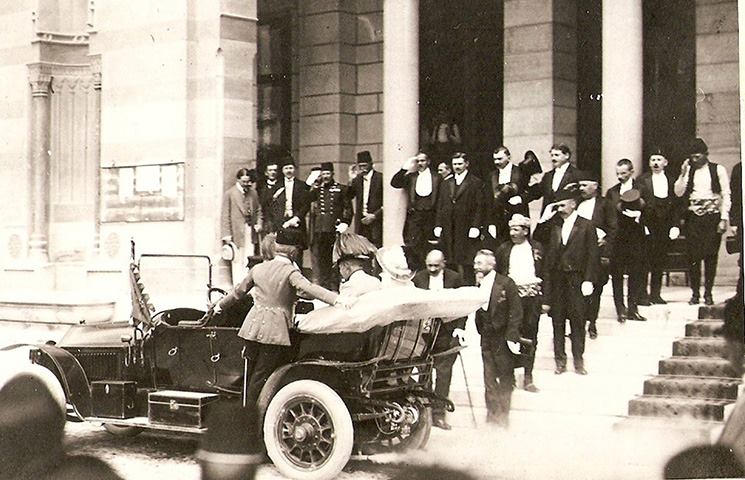 101 years ago, on 28th June 1914, Gavrilo Princip assassinated the Austrian Archduke Franz Ferdinand and his wife Sofia. This assassination divide the world into several  camps and was prelude to the World War I.

Gavrilo changed the world permanently with his act, and his name was an immortal symbol of an individual who determined the flow of history.

Franz and his pregnant wife Sofia came to Sarajevo in order to visit Austro-Hungarian military troops, the National Museum and to drive with the first tram in Europe. They also should celebrate the 14th anniversary of their marriage. A large number of citizens came out to the streets that day with flowers in order to welcome a prominent couple, and among them were the members of the organization Mlada Bosna (Young Bosna) who had a different intentions.

The first attempt of the assassination was carried out by Nedeljko Cabrninovic who threw the bomb to the car in which were Franz and Sofia, but the bomb was thrown out and exploded in the crowd. No one hoped for the second attempt. It was carried out by Gavrilo Princip with a gun. He shot two bullets that killed two persons and one life in a formation. This assassination was a motive for the bloody wars that followed throughout the world, and that lasted until 11th November 1918. More than 15 million people were killed and 22 million were wounded in that war. It is considered as the 5th most deadliest conflict in the history of a mankind

Gavrilo Princip was born on 25th July 1894 in a small village Oblaj, near the border between B&H and Croatia, near Bosansko Grahovo. He was one of nine children in his family, and only three of them survived. The story said that he was a sickly newborn baby and that the local priest said his family to name him Gavrilo after an angel Gabriel, and that it will help him in his survival. Despite the opposition of his father, Gavrilo started a primary school in 1903, as a nine-year-old boy. Soon, it turned out that he was very talented boy. He excelled in almost all subjects and even got an award of the school principal.

He became a member of the organization Mlada Bosna when he was 17. He and other members of the organization were holding meetings secretly-because the local government prohibited the formation of students clubs, especially political ones. At the meetings, they talked about the literature, politics and numerous other themes. The next year, 1912, Gavrilo Princip was expelled from the school due to his participation in a protest against the Austro-Hungarian government.

In the assassination, they had an assistance of the so-called Crna ruka (Black hand), the formation of the Kingdom of Serbia, that was secret. They provided attackers with weapons, training and money, and also pills to commit suicide after the assassination. After Gavrilo shot, he took a pill of cyanide which didn’t work and tried to shoot in his head, but police prevented him. He was sentenced to 20 years in prison. Organizer of the assassination, Danilo Ilic, was sentenced to death by hanging.

After the trial, Gavrilo Princip was imprisoned in Terezina, at the location of today’s Czech Republic. Sources said that his life in the prison was especially cruel, and prison conditions worsened during the war. He haven0t lived long in the prison-he died of tuberculosis on 28th April 1918. In a time of his death, Gavrilo weakened significantly from a disease and malnutrition, he weighed only 40 kilograms. He died in pains-tuberculosis ate his bones to such an extent that his arm had to amputated. He was first buries at a secret lcation, but in 1920, thanks to a Czech soldier, his bones were found and transported to Sarajevo.