The documentary film “Sarajevo Safari” by the Slovenian author Miran Zupanic, which premiered this year at the AJB Doc festival, continues to provoke reactions from the domestic and international public. The film is about rich foreigners who paid money to shoot civilians from the positions of the Republika Srpska (RS) Army in besieged Sarajevo during the 1990s. The case from the film also reached judicial institutions, and the allegations are being verified.

While the judicial institutions are investigating the allegations from the film, it should be reminded of the testimony before the Hague Court (by John Jordan, a former American marine who was in Bosnia and Herzegovina – BiH during the war). Jordan, during his testimony and interrogation, spoke about unknown persons who were brought in, which indicated that they were “tourist shooters”.

“On several occasions, I saw individuals who fit that profile when I was visiting the Serbian firefighters in Grbavica,” John Jordan said, among other things, in 2007. He stated this as a witness during the trial of Dragomir Milosevic for sniper shelling of civilians, civilian areas and the civilian population of Sarajevo.

The film “Sarajevo Safari” tells, namely, about rich foreigners who paid huge sums of money to kill civilians from sniper positions during the siege of the capital of BiH.

Near the skyscraper, which is considered to be one of the places where the crimes were committed, Edin Subasic, a retired officer, told when was the first time he got information about the phenomenon shown in the film.

“This case was special because it was not about mercenaries who were paid to be on the side of the Army of RS, but about civilians – foreigners who have nothing to do with our war, but for their own reasons, they paid to target the citizens of Sarajevowith snipers. When we look at the essence of the motive, it was a safari on people, which was a completely new phenomenon”, explained Edin Subasic, a retired officer of the Armed Forces of BiH.

“An acting prosecutor in the Special Department for War Crimes has been appointed, who in the upcoming period, together with partner institutions and agencies, will take the necessary measures to verify the allegations from the report,” it was mentioned in the reply signed by the spokesperson of this institution.

Namely, according to data from the Institute for Research of Crimes Against Humanity and International Law of the University of Sarajevo, during the siege, snipers killed 225 people, including 60 children,N1 reports. 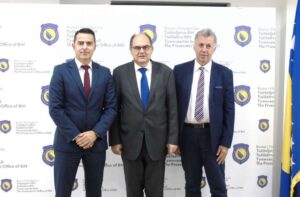